West Indies skipper Darren Sammy heaped praise on former captain and teammate Chris Gayle for his pre-match motivational speech that charged up the Caribbean side to demolish Bangladesh by nine-wicket on Friday. 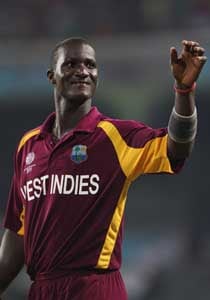 West Indies skipper Darren Sammy heaped praise on former captain and teammate Chris Gayle for his pre-match motivational speech that charged up the Caribbean side to demolish Bangladesh by nine-wicket here on Friday.

Gayle had given a motivational speech just before the match and his teammates responded by bowling out Bangladesh for their lowest ODI total of 58 in just 18.5 overs and then chased down the target easily in the 13th over.

"It was a brilliant performance by my team-mates. Chris Gayle wasn't feeling well today but I thought he came out and showed how committed he is to the cause," said Sammy, who scalped three wickets to help the team's cause.

"He said 'do not take Bangladesh lightly'. We were a little flat in the warm-up and he didn't like that so he encouraged us to go out there and remember Bangladesh would be coming hard at us," he said.

Sent into field, West Indies bowlers exploited the conditions well and reduced Bangladesh to 25 for three in 5.1 overs and Sammy said it was a kind of start that they had fancied about going into the crucial match.

"We went out there. We knew how crucial this game was for us. We've always fancied ourselves but it's up to us to go out there and play competitive and consistent cricket," he said.

Former skipper Gayle also praised, meanwhile, the bowlers for setting up the win and hoped it will clear their way to the quarterfinals.

"Kemar Roach (3-19) did a brilliant job and all the bowlers stepped up to the plate. The wicket seems to be doing a bit, I mean for the spinners. This will take us through to quarterfinal," he said.

"We can't relax. Ireland, India and England games are coming. I am trying to spend some time in the middle, I was trying to sort out things as quickly as possible and try to give the team good starts," he added.

Gayle was also instrumental in the moral-boosting win as opening the innings he scored an unbeaten 37 to not only set the platform for the chase but also crossed his 8,000 runs in one-day cricket.

"I was expecting a bigger occasion than this but having said that the wicket seems to be doing a bit," he said.

Comments
Topics mentioned in this article
Cricket Chris Gayle Ottis Delroy Gibson H Lorgat Bangladesh Cricket Team Darren Sammy World Cup 2011
Get the latest updates on ICC T20 Worldcup 2022 and CWG 2022 check out the Schedule, Live Score and Medals Tally. Like us on Facebook or follow us on Twitter for more sports updates. You can also download the NDTV Cricket app for Android or iOS.