Sachin Tendulkar accomplished yet another milestone on Wednesday as he completed 2000 runs in World Cup matches. 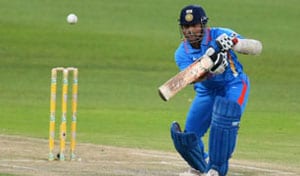 Sachin Tendulkar accomplished yet another milestone on Wednesday as he completed 2000 runs in World Cup matches.

Sachin, who is already the highest scorer in World Cups, smashed a boundary of the last ball of a Ryan ten Doeschate over to reach the feat.

The 37-year-old, who came into his 40th World Cup match with 1982 runs to his name, first played at cricket's showpiece tournament in 1992.

Tendulkar was later dismissed for 27 off 22 balls, caught near the long-off boundary by Bradley Kruger off the bowling of Pieter Seelaar.Â  The next player on the list is Australian skipper Ricky Ponting, who has 1,577 runs in 42 matches.

Comments
Topics mentioned in this article
World Cup 2011 India Cricket Team Sachin Ramesh Tendulkar France Mexico Canada Belarus Netherlands Portugal Cricket
Get the latest updates on ICC T20 Worldcup 2022 and CWG 2022 check out the Schedule, Live Score and Medals Tally. Like us on Facebook or follow us on Twitter for more sports updates. You can also download the NDTV Cricket app for Android or iOS.