Master batsman Sachin Tendulkar was seen in a new look with his curly locks coloured brown during India's practice session at the Sardar Patel Stadium, Motera on Tuesday. 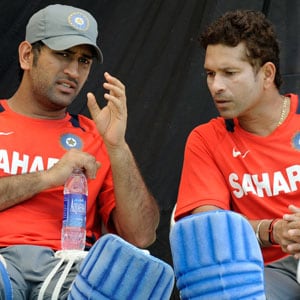 Master batsman Sachin Tendulkar was seen in a new look with his curly locks coloured brown during India's practice session at the Sardar Patel Stadium, Motera on Tuesday.

This would be for the first time that the 37-year-old wonder batsman has coloured his hair brown and joined the likes of players known for colouring their locks which include India's most successful bowler in the World Cup with 15 wickets, Zaheer Khan who has a strip of blond coloured hair.

Another player who is know for his colourful curly locks is Lasitha Malinga from Sri Lanka.

Tendulkar was seen in the new look during the practice session here ahead of their quarter final match against defending champions Australia. The highest run scorer is on verge of another feat of his career. Tendulkar is one century short of completing 100 tons in international cricket (both Tests and ODIs).

The Motera stadium was the venue where two greats of Indian cricket achieved their biggest milestones. On March 7 1987, Sunil Gavaskar became the first batsman to reach 10,000 runs in Test cricket when he late cut Pakistan leggy Ijaz Fakih for a three at the Sardar Patel Gujarat stadium in Motera.

Tendulkar who missed the feat during the team's concluding group B match against the West Indies last Saturday at Chennai would be looking forward to attaining the record of 100 tons in international cricket on Thursday against world champions Australia.

Comments
Topics mentioned in this article
World Cup 2011 Cricket Sachin Ramesh Tendulkar
Get the latest updates on ICC T20 Worldcup 2022 and CWG 2022 check out the Schedule, Live Score and Medals Tally. Like us on Facebook or follow us on Twitter for more sports updates. You can also download the NDTV Cricket app for Android or iOS.