An India-Pakistan match is almost always a big money-spinner, and a World Cup semi-final clash is as big as it gets. 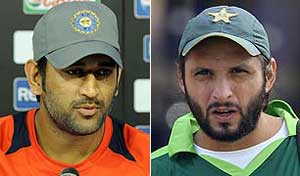 An India-Pakistan match is almost always a big money-spinner, and a World Cup semi-final clash is as big as it gets. Bookies and punters across the country are gearing up to run a show that is estimated to rake in Rs 5,000 crore on the betting circle as India takes on Pakistan in the semi-final at Mohali on March 30.

Minutes after India's win over Australia in the quarter-final clash at Ahmedabad, bookies unable to predict a clear winner have rated both India and Pakistan at 90 paise to win the semi-final clash. "Both are strong teams. But the rates could reopen on Friday," informed a senior bookie.

Even as the police stepped up vigil, bookies fear that members of the Dawood Ibrahim gang could make a windfall from the turnover. Dawood's presence in Karachi could play a major role in the outcome of the match fear Mumbai bookies.

There are reasons to suspect that some of the bookies owing allegiance to the D Company may default under pressure from Dawood's henchmen. "The possibility of sauda fok is not ruled out if Pakistan loses the match against India,'' a senior bookie pointed out.

Joint Commissioner of Police (crime) Himanshu Roy on the other hand said his men are on alert looking out for bookies and punters. "We are trying to track them," remarked Roy.

Insiders informed that the India-Pak match is expected to bring a windfall to hawala operators across the sub-continent. A large number of high profile bookies from Pakistan are planning to 'cut' their bets through Dubai, which is the hub of illegal money transfers during the betting season.

The seriousness of the terror threat to the World Cup final at Wankhede Stadium can be gauged from the fact that the Commissioner of Police Arup Patnaik is personally supervising security arrangements.

The first layer of security will comprise a mobile combat team of one sub-inspector and four men under the command of an Assistant Commissioner of Police. They will be armed with two AK-47 assault rifles, one Sten gun, two SLRs and five 9mm pistols.

The second layer will comprise 20 personnel from the Quick Response Team (QRT). Four special bulletproof vehicles commanded by a sub-inspector will also be positioned in the area.

QRT personnel will be equipped with bulletproof trucksÂ  (Maharakshaks). Each truck will have a complement of nine commandos and one officer.

The Intelligence Bureau (IB) issued a fresh directive to all police departments to look out for terror suspects who might enter the country throughÂ  Wagah on the pretext of watching the India-Pakistan match at Mohali.

IB officials said they have reasons to suspect that a number of Pakistani spectators who came into the country to watch the cricket matches have not returned.

30,000; The number of seating capacity of the Mohali Stadium

5,000; No of visas that were to be issued to spectators from Pakistan

Comments
Topics mentioned in this article
India Cricket Team Pakistan Cricket Team New Zealand Cricket Team World Cup 2011 Cricket
Get the latest updates on India vs South Africa and check out  Schedule, Results and Live Score. Like us on Facebook or follow us on Twitter for more sports updates. You can also download the NDTV Cricket app for Android or iOS.