Razzaq may soon bat at number three for Pakistan

The Pakistan team management is considering the option of promoting experienced all-rounder Abdul Razzaq to number three position in the batting order if the opening pair of Muhammad Hafeez and Ahmed Shahzad continue to fail in the World Cup. 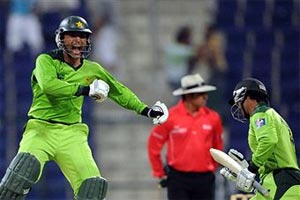 The Pakistan team management is considering the option of promoting experienced all-rounder Abdul Razzaq to number three position in the batting order if the opening pair of Muhammad Hafeez and Ahmed Shahzad continue to fail in the World Cup.

Well placed sources in the team have said that the proposal to send Razzaq up the order has been discussed but the management had decided to mull further on it and see how the opening pair performs in the remaining matches.

The 32-year old, who has played 46 Tests and 257 One-day internationals, was used before at the crucial number three position as a pinch hitter and was pretty successful in the 1999 World Cup.

Presently Razzaq is filling in the role of the second allrounder in the side after captain, Shahid Afridi and is coming into bat as low as number eight but shares the new ball.

Former Pakistan greats Imran Khan and Wasim Akram believe that the experienced allrounder is being wasted at number eight and the team management needs to look at the option of dropping one batsman and playing an extra bowler in the World Cup.

Wasim though feels that sending Razzaq at number three may not be a good idea.

"That was 11 years back and he is now older. But definitely the management can look at the option of having Kamran Akmal open the innings and move all the batsmen up the order one spot that would allow them to play an extra pacer or spinner and also take load off Razzaq as a new ball bowler," he told Geo Super.

The sources said the idea was that Razzaq can also be sent up the order at number three for some lusty hitting if the opening pair gives a solid foundation. Kamran can then come down the order to shore up the batting.

"The feeling is that if Razzaq clicks in one or two games at number three with his clean hitting it will give Pakistan a big edge over the other teams," one source said.

Comments
Topics mentioned in this article
New Zealand Cricket Team Pakistan Cricket Team Mohammad Hafeez World Cup 2011 Abdul Razzaq Cricket
Get the latest updates on ICC T20 Worldcup 2022 and CWG 2022 check out the Schedule, Live Score and Medals Tally. Like us on Facebook or follow us on Twitter for more sports updates. You can also download the NDTV Cricket app for Android or iOS.