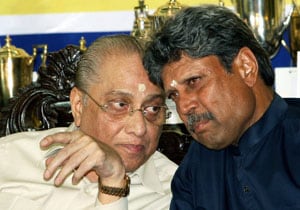 Legendary all-rounder Kapil Dev on Saturday credited Ravindra Jadeja for the recent success of the Indian cricket team and termed the Saurashtra player the "most valued cricketer" presently.

"Since he (Jadeja) came in, it made so much difference to the team. He is the most valued cricketer at the moment," Kapil said.

Kapil said Jadeja was a great asset to the team with his impressive bowling, batting and sharp fielding.

"In last one year, he has established himself more than an all-rounder. He was the one who lifted the fielding, he set the standards not lift the standards.

"Good to see a player of his calibre who can play and win matches with his batting, bowling and on top of that with his fielding. Hats off to him. It's great to have a player of his ability in the team," the 1983 World Cup winning skipper said on the sidelines of Cricket Association of Bengal's annual awards ceremony.

Having seen the youngsters perform during India's successful Champions Trophy campaign, the cricketer-turned-commentator said the generation next did not let anybody feel the absence of the likes of Sachin Tendulkar, Rahul Dravid, Virender Sehwag, Yuvraj Singh and Gautam Gambhir.

"When you did not have the big players who had served the country so well, and you don't miss them that means the next generation has arrived. I am not saying we don't miss the big names anymore but what I'm saying is that the young cricketers are playing so well that we did not miss the big guns," he said.

Talking about 2015 World Cup, Kapil said the youth brigade can successfully defend their title in Australia.

"It's too early to say that how many will be fit enough to play in the tournament. But, yes we have enough young boys who can play the next World Cup and win it and that's important," he said.

Equally effusive in his praise for skipper Mahendra Singh Dhoni, Kapil said it was tougher Dhoni than during his time to win the World Cup.

Asked to compare the two victories of 1983 and 2011, Kapil said: "This one. Tomorrow, it will be more difficult. The reason is obvious. Life gets tougher, so in future it would be more tough. It won't be easy. Next generation is always much more harder and tougher."

"Everybody knows that he's done wonderfully well for himself and the team. Yes, he is one of the best captains and we should respect that. When you ask such question, you have a doubt in your mind. I have no doubts, I don't talk about him. He's the best captain at the moment. We should just say that he is the captain," Kapil replied when asked if Dhoni was the all time best. 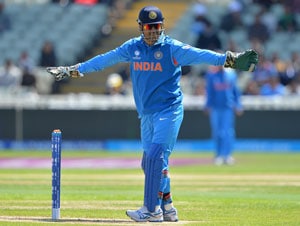 On Virat Kohli being the future captain, he said: "As long Dhoni is there, we should not talk about any other person. If we have a captain, we should respect him. The day selectors think it's time to change then we should talk about it. I will not about Kohli at all."

Kapil said the Indian opening duo of Virender Sehwag and Gautam Gambhir, who were struggling to make a comeback should not lose hope and work harder.

"If Gambhir or Sehwag think that they cannot come back then they should pack up and go back home and sleep. A sportsman is a fighter and takes up the challenge," he said.

On the contentious DRS use, Kapil said: "Let's not make it more complicated. ICC is doing their job. We cannot make everybody happy. But if we have to accept something, most should be happy."

Doping is the latest to hit Indian cricket and Kapil urged the likes of Pradeep Sangwan, who failed a random dope test in IPL 6, to learn from others' mistakes.

"I don't talk negatives. If the young boys cannot learn from other people's mistakes then it's a sad thing. Whatever happened I don't know. I just want to wish everybody good luck."

On spot-fixing he said: "If you play good cricket, a lot of bad things get hidden. But we don't want to hide anything. We should have clean cricket as this country loves the game more than anything else. It's the only thing that can unite the country."

Kapil further showered praise on Kolkata saying that the passion of the city for cricket matches that of Brazil in football.

"Kolkata is a very joyful city. People of the city are mad, they are crazy, you can put it anyway. Either they can love you or hate you. This city has a charm of its own. It's unmatched and can compare this with the football fervour in Brazil," he said.

The chief guest of the CAB awards ceremony, Kapil further thanked the interim BCCI president Jagmohan Dalmiya and hailed him as the most sought after cricket administrator in the country.