Raina was boosted by Sachin high-five

He didn't feature in the playing XI in India's first five games of the 2011 World Cup. But when he got his chance, he was determined to make it count. 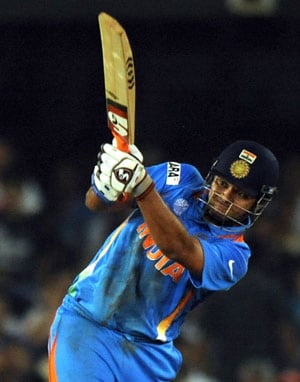 He didn't feature in the playing XI in India's first five games of the 2011 World Cup. But when he got his chance, he was determined to make it count.

On Thursday, against defending champions Australia, Suresh Raina scored an unbeaten 34 off 28 balls to guide India to a famous, five-wicket win. "I knew I would do well once I got my chance. I wanted to prove something to myself," Raina told MiD DAY after yesterday's quarter-final victory.

Raina was grateful to India coach Gary Kirsten. "All thanks to Gary for giving me the opportunity. He kept his faith in me," he said. Raina was pumped up before walking out to bat. "Just as I was walking out, Sachin give me a high-five in the dressing room. I was boosted by that gesture."

Raina was helped by senior partner Yuvraj Singh on the field.

"Yuvi guided me throughout. He told to play along the ground,' Raina informed.

Comments
Topics mentioned in this article
Sachin Ramesh Tendulkar India Cricket Team Australia Cricket Team Suresh Raina World Cup 2011 Cricket
Get the latest updates on ICC T20 Worldcup 2022 and CWG 2022 check out the Schedule, Live Score and Medals Tally. Like us on Facebook or follow us on Twitter for more sports updates. You can also download the NDTV Cricket app for Android or iOS.