The government had received a complaint from a person using a fictitious name alleging irregularities in procurement of equipment for last month's National Games and the matter has been referred to Sports Ministry's Vigilance Wing, minister Ajay Maken said on Tuesday. 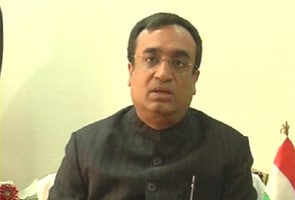 The government had received a complaint from a person using a fictitious name alleging irregularities in procurement of equipment for last month's National Games and the matter has been referred to Sports Ministry's Vigilance Wing, minister Ajay Maken said on Tuesday.

"The government received a pseudonymous complaint alleging irregularities in procurement of sports equipment for Jharkhand National Games, on which comments of Indian Olympic Association (IOA) were obtained.

"The IOA has stated that all the sports equipment were purchased by the National Games Organising Committee, Ranchi. As per Host City Agreement between IOA, NGOC and State Government, IOA was to provide list of equipments along with the brands," Maken said in reply to a question in the Lok Sabha.

"IOA has informed that it has appointed a committee in consultation with the National Sports Federation and the committee finalised the list of all the equipment which were furnished to NGOC. This matter has been referred to the Vigilance Wing of the Ministry of Youth Affairs and Sports for appropriate action in the matter," he said.

He said the authority to conduct an inquiry into any financial irregularities in the conduct of National Games lies with the state government, state Olympic association and Indian Olympic Association.

Maken said the government has disbursed the cash rewards announced for outstanding performance in various disciplines during the Commonwealth and Asian Games.

"Disbursal of award money under the Scheme of Special Awards for winners of medals in international sports events and their coaches is an ongoing process. Applications for cash awards recommended by NSFs are considered for award money under the provisions of the scheme after verification of the achievements of sportspersons by SAI," he said.

"All medallists of CWG 2010 and Asian Games 2010 have been awarded the cash awards under the scheme of Special Awards for winners of medals in international sports events and their coaches.

To a question whether the central investigating agency has found irregularities in the tenders for the installation of kitchen and sports equipments at Major Dhyan Chand National Hockey Stadium, Maken said, "Government has appointed a high level committee under the chairmanship of V K Shunglu, former Comptroller and Auditor General of India to look into issues relating to the organising and conduct of the CWG and lessons to be learnt in future."

"This Committee has already given its first report to the government on Host Broadcasting. The final report is likely to be submitted to government by March 31. CAG has commenced audit of all games related agencies. Central Vigilance Commission is examining complaints received in respect of CWG.

Besides, other agencies like the CBI, Enforcement Directorate and Income Tax Department are also reported to be making investigations as per their mandate," he said.

To a question whether it has been found in the audit of CWG that the Organising Committee had inflated the rate of certain items including for overlays contracts.

"Organising Committee has informed that audit report from CAG has not yet been received. Rs 687 crore has been allocated to OC for overlays which includes Rs 53.23 crore for temporary score boards, network switches, etc. These matters are under enquiry by investigating agencies. Action as appropriate would be taken by them on completion of enquiry."

Comments
Topics mentioned in this article
John Davison Cricket Fernando Alonso Australia Cricket Team World Cup 2011 Other Sports
Get the latest updates on IND vs NZ 2021, check out the Schedule and Live Score . Like us on Facebook or follow us on Twitter for more sports updates. You can also download the NDTV Cricket app for Android or iOS.