The batting powerplay code is yet to be cracked by World Cup captains, most of whom have burned their fingers already by making the wrong calls. 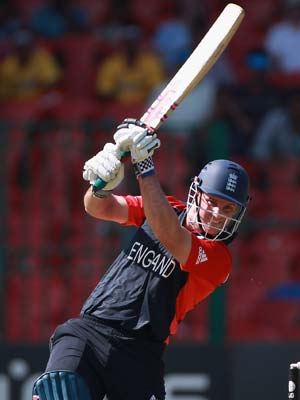 The batting powerplay code is yet to be cracked by World Cup captains, most of whom have burned their fingers already by making the wrong calls.

The batting powerplay allows just three fielders outside the 30-yard circle for a chunk of five overs and offers players an opportunity to go for big hits.

But the point of contention is what time is best to take it as the wrong call at the wrong time can play into the hands of the fielding side.

As England showed against India in the tied match at Bangalore, it can upset a team's rhythm by tempting batsmen to take one risk too many.

England were cruising at 280-2 when they opted for the batting powerplay in the 43rd over and ended up losing four wickets for 25 runs in the following five overs to throw the game wide open.

"We got ourselves in a position at 41 or 42 overs where we just needed to have a good powerplay and we were there," England captain Andrew Strauss said. "But these powerplays can affect you both ways and unfortunately it affected us in the negative way. In the end, we did pretty well to scramble a tie out of it."

The batting powerplay was introduced to jazz up the 50-over game after critics said it had become too predictable, especially in the middle overs.

The scope to use it ranges from the 11th to the 46 over which leaves the batting captain with a lot to ponder.

Should it be kept aside till the end of the innings? Should it be unleashed when two well-set batsmen are going strong?

India's former captain Sunil Gavaskar says it should be taken when a batting pair is going strong.

"While there is a school of thought that the batting powerplay can bring the bowling side back in the frame, the fact remains that it is best utilised when two well set batsmen are at the crease," he wrote in a column.

"The crucial aspect is not to try and hit every ball into the crowd and give them some catching experience but to take advantage of the field restrictions and double or treble the rate of scoring from the present in those overs."

Australian captain Ricky Ponting talked of the predicament skippers face over the timing of the powerplays.

"It's a tough question when you're chasing runs. It all depends on how your top order starts," he said.

"If you lose early wickets, it's always tough to take the powerplay early because what the powerplay generally brings is a couple of wickets."

New Zealand captain Daniel Vettori said it will be some time before the concept is mastered.

"Some days you will do well in power plays, some days poorly. It's really hard to get a consistent feel on it. Three of the last four games we have been great with the ball and in one of them we were really poor.

"So it swings every game. You can't say any team has mastered either side of it."