Ricky Ponting has been overburdened as Australian captain and let down by people in leadership roles, former coach John Buchanan said on Friday. 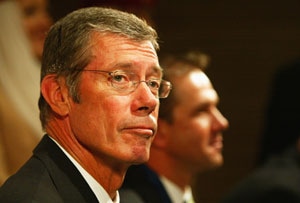 Ricky Ponting has been overburdened as Australian captain and let down by people in leadership roles, former coach John Buchanan said on Friday.

Buchanan, who coached Australia to World Cup triumphs in 2003 and 2007, said the country's cricket leaders had put too much responsibility on to Ponting's shoulders.

Ponting's fighting innings of 104 was not enough to prevent his side from bowing out of the World Cup to hosts India in Ahmedabad on Thursday to end their 12-year reign as world champions.

"Ricky still has an incredible amount to offer Australian cricket, but at the same stage he has to be in the right frame of mind to do that," Buchanan said.

"I think for the last 18 months or so that hasn't been the case because he has, in a sense, tried to take on too much responsibility for the whole team - his game play as well as his all-round leadership.

"I'm disappointed at other people around him, basically people in senior formal leadership roles, who have allowed him to do that.

"And I think that has contributed to making life very difficult for him in the role.

"Better leadership from other people around him might have guided him in a slightly different direction."

Buchanan declined to identify those he felt had let Ponting down.

"I will leave it to people to interpret a little bit, but I will just say people in other formal leadership roles in and around the team," he said.

Ponting's job was to captain and lead by example, rather than building a side, forming its culture, or selection matters, Buchanan said.

"That is what we saw last night," he said, referring to Ponting's century in Australia's World Cup quarter-final loss to India.

"He was able to have his energies directed to one game... so all the thinking about how you are going to develop a side and build a culture and selections here and selections there, were irrelevant.

"It was all about that one game and I think that showed last night, that is what he is capable of doing when his attentions are in the right direction.

"I think therefore there is a range of other people who relied on him to do more of the other work - building a team, building a culture, looking at selection - which are things that he has carried and felt very personally involved with.

"But I think they are much bigger than he anticipated and that he should not have been allowed to burden himself with."

Comments
Topics mentioned in this article
World Cup 2011 JM Buchanan Ricky Ponting Cricket
Get the latest updates on ICC T20 Worldcup 2022 and CWG 2022 check out the Schedule, Live Score and Medals Tally. Like us on Facebook or follow us on Twitter for more sports updates. You can also download the NDTV Cricket app for Android or iOS.