Ricky Ponting has quashed reports that he will retire after the World Cup, confirming that he has no plans to end his playing career or give up the captaincy. 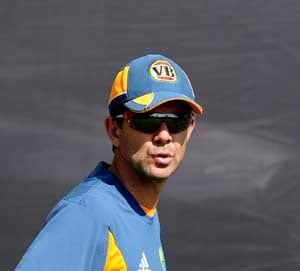 Ricky Ponting has quashed reports that he will retire after the World Cup, confirming that he has no plans to end his playing career or give up the captaincy. The Daily Mail on Wednesday reported that Ponting, 36, would retire and was hoping to cap off his career by captaining an English county side this year, but Ponting said the story was untrue. (Also Read: Teammates back Ponting)

"I've never ever thought about retirement or where the finish line might be," he said. "I've been trying to prepare myself as best I can as a player and lead the team as well as possible. For some reason, these retirement things keep popping up all the time. As we all know, you probably shouldn't always believe everything you read in the newspaper.

However, there was some truth to the report, with Ponting's management having scouted around the county circuit in an attempt for Ponting to secure a first-class deal in the lead-up to Australia's Test tour of Sri Lanka in August. Ponting said the county option had fallen through due to the timing of the English domestic competitions.

"I looked at trying to play some county cricket before the Sri Lankan tour this year, for the fact that I would have been coming off three months of no cricket and I thought we were going straight in to Test matches," Ponting said. "That's why my management had a look around a few of the counties to see if they were interested. As it worked out, our programs just didn't line up.

"The Twenty20s and one-dayers are mainly on in England at that time and I wanted to get some four-day cricket under my belt before the Test matches in Sri Lanka. That's how that started, but it didn't work out and I certainly won't be going to play there this year."

The retirement rumour came a day after a report in the Sydney Morning Herald, in which an unnamed Cricket Australia official was quoted as saying that Ponting faced a challenge at board level to retain the captaincy. Ponting said he was keen to play on in Test and ODI cricket and if he was asked to step aside as leader to make way for Michael Clarke, it would not be an issue.

"If Cricket Australia believe, or the selectors believe that there's someone out there better to captain any team that I play in, then so be it," Ponting said. "If it happens that I'm still good enough to be playing in the team with another captain, then so be it as well. I'm open to any of that sort of stuff. By the same token, I'll know when the time is right for me to step aside as captain or step aside as a player. Right now, I don't think that's the right time."

Comments
Topics mentioned in this article
World Cup 2011 India Cricket Team Australia Cricket Team Ricky Ponting Sven Lehmann Marcus Trescothick Cricket
Get the latest updates on ICC T20 Worldcup 2022 and CWG 2022 check out the Schedule, Live Score and Medals Tally. Like us on Facebook or follow us on Twitter for more sports updates. You can also download the NDTV Cricket app for Android or iOS.