Ponting as a captain at the end of his tether: Roebuck

As Australia is preparing for the high-voltage World Cup quarter-final against India, the Australian media has trained guns on skipper Ricky Ponting, severely criticising his captaincy and poor form with the bat. 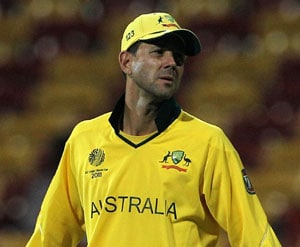 As Australia is preparing for the high-voltage World Cup quarter-final against India, the Australian media has trained guns on skipper Ricky Ponting, severely criticising his captaincy and poor form with the bat.

Noted cricket writer Peter Roebuck said the way Australia have performed so far in the World Cup, their chance to defend the title are "bleak". Roebuck wrote in 'Sydney Morning Herald' following Australia's first defeat in the World Cup since 1999. Australia lost to Pakistan in the last league match to finish third in group B.

"In the days before Australia's final first-round match against Pakistan, voices in the Australian camp had claimed: 'Now we will see the true Australian team.' Yet the tone was troubled. Maybe the real Australian team did appear in Colombo on Saturday. If so, its prospects are bleak," he wrote.

Roebuck questioned the tactics of Ponting during the match against Pakistan. "His captaincy, likewise, lacked conviction. That Lee, his best bowler, did not complete his allocation was a palpable error. His field placements were unduly defensive, except for Tait, who does not rely on close catchers.....

"It might sound like panic, but the team is in urgent need of fresh blood. Ponting might even appreciate their inclusion. At present, he looks like a batsman on his last legs and a captain at the end of his tether. Ponting is raging against the dying of his light," he opined.

Meanwhile, another media report claimed that Ponting runs the risk of losing his captaincy after the World Cup and Australia may be led by Michael Clarke in next month's tour of Bangladesh.

"As Ponting prepares to lead his team against cricket superpowers India in Thursday night's cut-throat World Cup quarter-final in Ahmedabad, it has emerged the 36-year-old faces as big a battle with Australian powerbrokers to hold on to his job," the report said.

"The Herald has been told by a senior Cricket Australia official there should at least be a discussion by the board on whether Ponting should lead the side to Bangladesh even if national selectors name the Tasmanian as captain for the tour."

The report listed recent happenings that may have weakened Ponting's value. "After being reprimanded for damaging a TV screen with his protector in Australia's first game, Ponting has created headlines for publicly admonishing a junior teammate, Steve Smith, and had his sportsmanship questioned for failing to walk in Saturday's defeat to Pakistan," the report said.

An unnamed Cricket Australia official was quoted as saying, "We're waiting for the next thing to blow up. We don't go a game without there being some issues with him."

Comments
Topics mentioned in this article
World Cup 2011 Ricky Ponting PM Roebuck Cricket Australia Cricket Team
Get the latest updates on India vs South Africa and check out  Schedule, Results and Live Score. Like us on Facebook or follow us on Twitter for more sports updates. You can also download the NDTV Cricket app for Android or iOS.