Indian captain Mahendra Singh Dhoni on Thursday patted his team-mates for giving more than 100 per cent in the home side's five-wicket win over Australia in the World Cup quarter final. 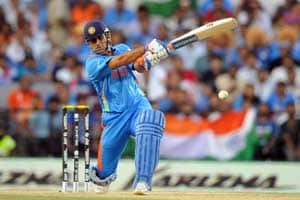 Indian captain Mahendra Singh Dhoni on Thursday patted his team-mates for giving more than 100 per cent in the home side's five-wicket win over Australia in the World Cup quarter final here.

"I'd have been satisfied keeping Australia to 250. But we had our best fielding unit today. We are not a good fielding side we did very well on the field. I think we saved around 15 runs that we did not need to chase," Dhoni said after the match.

"All the players gave more than 100 per cent in the match," he said.

Dhoni admitted that his side were under severe pressure when they needed 70-odd runs to win but knew that they would romp home if Yuvraj Singh and Suresh Raina batted out the 50 overs.

"We needed 70-odd runs with the last batting pair. We were under pressure and the dressing room was tense. But we knew if Yuvraj and Raina played out the 50 overs we would make it. It was about handling the pressure," said Dhoni.

He said Suresh Raina was included in place of Yusuf Pathan as the team wanted to bat out the full 50 overs.

"We wanted to bat out the full 50 overs. At number seven Yusuf's job was to go for runs. With Yusuf we were not able to bat out the 50 overs. We wanted 20-25 more runs. Raina is technically better than Yusuf and suited for this. It was not based on talent but it was about choice depending on the situation. We know Yusuf can be a very dangerous player," he said.

Asked about the semifinal against Pakistan in Mohali on Wednesday, Dhoni said, "The World Cup is being held in the sub-continent and India and Pakistan are playing in the semifinals. It does not get better. The pressure will be big, but in reality it makes no difference to us. It will be just a game. Indian cricket team has always been under pressure and we have handled it well."

Australian captain Ricky Ponting conceded that his bowling department did not do well enough to win the match.

"We played a reasonable game but not enough to win the match. It is disappointing to have lost the match. Probably, we did not bowl the way we would have wanted. We needed more wickets in the middle of the innings but could not not do it," said Ponting who scored 104 to help Australia score 260 for six.

"We competed hard and thought at the innings break that we have a chance to win with 260 runs. With 15 overs to go, it was touch and go, but Yuvraj and Raina played really well. We could not break the partnership of Yuvraj and Raina.

"Good luck to India in the semifinals," Ponting said. Raina, who stitched 74 runs from 10.1 overs with Yuvraj Singh for the unbroken sixth wicket to take India to victory, said a "high-five" from Sachin Tendulkar inspired him to give his best for the team today.

"When I was sitting at the dressing room, Tendulkar came and gave me a high five. I thought he wanted me to do something for the team today. That gave me the confidence to give my best for the team," he said.

"Thanks to coach Gary Kirsten for keeping faith on me and play me today (in place of Yusuf Pathan). I wanted to give my best whenever I get a chance and I did that today," said an elated Raina.

Comments
Topics mentioned in this article
World Cup 2011 MS Dhoni India Cricket Team Australia Cricket Team Anil Kumble Yuvraj Singh Gary Kirsten Cricket
Get the latest updates on India vs South Africa and check out  Schedule, Results and Live Score. Like us on Facebook or follow us on Twitter for more sports updates. You can also download the NDTV Cricket app for Android or iOS.