Pakistanis celebrate after win over Aussies 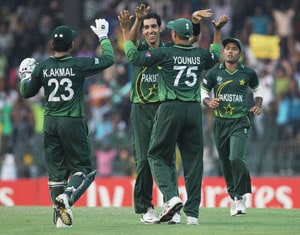 Australia lost by four wickets to Shahid Afridi's men, a defeat that ended their 34-match unbeaten streak in the tournament stretching back to the 1999 edition.

Prime Minister Yousuf Raza Gilani congratulated the team, saying he hoped they would go on to win cricket's showpiece event for the second time.

Saturday's loss was Australia's first in the World Cup since losing to Pakistan by 10 runs at Leeds in 1999.

Former Pakistan captain Imran Khan praised the team for their victory, which means they topped Group A and will play the fourth-placed team in Group B in the quarter-finals.

"I congratulate the Pakistan team for their tremendous win," said Imran, who led the team to their only World Cup title in Australia in 1992.

"It was a complete team effort and with the natural talent that the Pakistan team has, I think they can win this World Cup," said Imran.

Pakistan dismissed Australia for their lowest total since the 1992 World Cup before withstanding paceman Brett Lee's burst of four wickets to win with nine overs to spare.

"The mix of youth and experience is helping Pakistan," said Imran.

"During this World Cup, the Australian batting has not fired the way they would have wished. However, they have managed to get the job done thus far. Pakistan did well to bowl them out for 176," Sohail said.

"They have done a marvellous job. The way Pakistan played against Australia has proved they can win the Cup," Momin Khan, a young fan told AFP in Pakistan's largest city of Karachi.

Comments
Topics mentioned in this article
Cricket World Cup 2011 New Zealand Cricket Team Pakistan Cricket Team Australia Cricket Team
Get the latest updates on ICC T20 Worldcup 2022 and CWG 2022 check out the Schedule, Live Score and Medals Tally. Like us on Facebook or follow us on Twitter for more sports updates. You can also download the NDTV Cricket app for Android or iOS.