Pakistan may have won their opening two matches of the World Cup but former Captain Imran Khan feels the team would struggle as the tournament progresses as it is playing a bowler short. 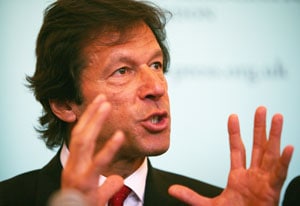 Pakistan may have won their opening two matches of the World Cup but former Captain Imran Khan feels the team would struggle as the tournament progresses as it is playing a bowler short.

Imran, under whom Pakistan won their first and only World Cup title in 1992,Â  said he would try to speak to current captain Shahid Afridi and coach Waqar Younis on the matter.

"I strongly believe that although we won against Sri Lanka, Pakistan is playing one specialist bowler short and needs to include a bowler in place of a batsman or all-rounder," he said.

Imran pointed out that against strong opponents and on a good batting pitch, Pakistan's bowling could struggle.

"So far our bowlers have done well in the World Cup but the team could feel the pinch against stronger opposition. I think they must play either Saeed Ajmal or an extra pace bowler," he said.

The cricketer-turned-politician also maintained that it was no use playing all-rounder Abdul Razzaq at the number eight position.

"Frankly speaking he is being wasted there and he is not the one to take the new ball in the sub-continental conditions. I think Pakistan needs to be looking at taking wickets with the new ball instead of giving Razzaq a containing role," he said.

"It is very important for Pakistan to win this World Cup as such a victory would go a long way in clearing the image of Pakistan cricket after the recent controversies and also maybe convince teams to start touring Pakistan again," he added.

Comments
Topics mentioned in this article
World Cup 2011 Pakistan Cricket Team Shahid Afridi New Zealand Cricket Team Abdul Razzaq Cricket
Get the latest updates on ICC T20 Worldcup 2022 and CWG 2022 check out the Schedule, Live Score and Medals Tally. Like us on Facebook or follow us on Twitter for more sports updates. You can also download the NDTV Cricket app for Android or iOS.