Pakistan eying win against Australia to top Group A

Pakistan might have eased into the quarter-finals of the World Cup on Monday but the 1992 champions are aiming to top Group A with a victory over world champions Australia in their final league match on Saturday. 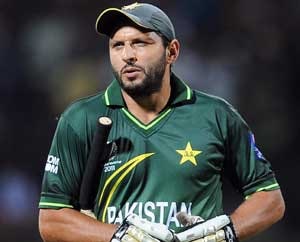 Pakistan might have eased into the quarter-finals of the World Cup on Monday but the 1992 champions are aiming to top Group A with a victory over world champions Australia in their final league match on Saturday.

Pakistan defeated Zimbabwe by seven wickets in a rain-curtailed match to secure the fourth and final quarter-final spot from Group A with eight points from five games.

"We will definitely play well against Australia. It's a match which we'll take very seriously," Afridi said.

"It would be another day and a new game. We know how important that match is and we hope to give our best."

Asked whether pacer Umar Gul, who won the man-of-the-match award for his three for 34 runs spell, would continue to bowl with the new ball for the remainder of the tournament, Afridi said, "It depends on the opposition and conditions. "Today it was overcast and that's why we opted to bowl him with the new ball. Maybe we'll change the combination for the next game," he added.

Man-of-the-match Gul echoed similar sentiments to that of his captain and said they are ready to take on Australia in Colombo on Saturday.

"We are looking forward to the big game against Australia and will do the home work for them," Gul said in the post-match press conference.

He said he was happy to have got back his rhythm. "I'm back in my form and rhythm. I tried to bowl wicket to wicket. I looked at the pitch before the match, I was happy to bowl first. We are looking forward to the game against Australia. We have done our homework, we will do our best," he said.

Although Gul has generally come in as first change for Pakistan in this competition, on Monday he shared the new ball with Abdul Razzaq and troubled the Zimbabweans from the word go.

The loss meant Zimbabwe are out of the competition with one game left and captain Elton Chigumbura admitted his side did not have enough runs on the board to challenge Pakistan. "We lacked runs. We lost too many wickets and when that happens it's hard to come back to the game. With the rain we lost momentum towards the end," he said.

"After this, we are going to work on our batting, especially in the first 10 overs. I thought Craig Ervine played pretty well. I'm happy with the bowling also, the spinners with old ball bowled good lines," he added.