Pakistan captain Shahid Afridi on Wednesday said that his team were unnerved by the prospect of playing India, whom they have never beaten in the World Cup, in the semi final in Mohali. 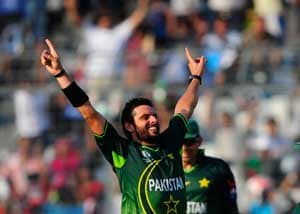 Pakistan captain Shahid Afridi on Wednesday said that his team were unnerved by the prospect of playing India, whom they have never beaten in the World Cup, in the semi final in Mohali.

"If we happen to clash with India, we won't lack crowd support because (Pakistani) people will come from across the border to watch the match in Mohali," Afridi told MiD DAY.

Pakistan booked their semi-final berth by crushing the West Indies by 10-wickets in the first quarter final on Wednesday. They await the winner of the second last-eight encounter between India and Australia in Ahmedabad Thursday.

India have a 4-0 head-to-head record against Pakistan in World Cup matches but Shahid Afridi was confident of turning the tables if the world's No 1 ODI team managed to knockout the defending champions. "India maybe the world's best team but we are capable of beating them," he said.

"This (Pakistani) side has a lot of focus. Today we achieved our first objective of winning the quarter final. The second objective is (winning) the semi-final. We are taking one step at a time."

Afridi took heart from the fact that the PCA stadium in Mohali had been a happy hunting ground for Pakistan. "Mohali has been good for us. In 2007-08, we won chasing a 300-plus target. In 2005, Kamran Akmal and Abdur Razzaq helped us draw a Test which we could have lost," he said.

Afridi contributed to the huge win over the West Indies, bagging fours wickets for 30 runs off 9.3 overs to consolidate his position as the tournament's leading wicket-taker with 21 wickets. The West Indies were bundled out for 112, their third lowest World Cup total, with more than six overs remaining. Off spinner Mohammad Hafeez, who shared the new ball with Umar Gul, picked two wickets in four balls and then made made 61 off 64 balls to lead the successful chase.

West Indies skipper Darren Sammy conceded the two-time champions had some fundamental issues. "We did not have enough runs on the board. We didn't counter the bowling well, and fell well short," he said. "We have lost wickets in clusters all through the tournament and today was no exception. We were forced on the backfoot early and never recovered."

Comments
Topics mentioned in this article
India Cricket Team Pakistan Cricket Team New Zealand Cricket Team World Cup 2011 Punjab Cricket Association Stadium, Mohali Cricket
Get the latest updates on ICC T20 Worldcup 2022 and CWG 2022 check out the Schedule, Live Score and Medals Tally. Like us on Facebook or follow us on Twitter for more sports updates. You can also download the NDTV Cricket app for Android or iOS.