Last year, the board had given a pay raise of 25 per cent in the monthly salaries and also increased the players' Test, ODI and T20 fees by around 20 per cent. 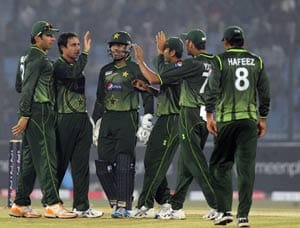 Pakistani cricketers have received an increase of 15 per cent in their monthly salaries and a raise of 55,000 rupees in their Test match fees but most of their demands for pay raises have been shelved by the Pakistan Cricket Board.

"Unfortunately, while the board has given them a partial pay hike, most of their demands have been shelved for the time being because of the tight financial condition of the board," the source said.

He said that most of the players, who were leaving early on Tuesday to play one-day series in Scotland and Ireland and then the Champions Trophy in England, signed the contacts offered to them after the meeting.

"But, interestingly, the main complaint is they were only given the last page of the contract to sign on and told they will get their full contract on tour from manager, Naved Cheema," the source said.

Last year, the board had given a pay raise of 25 percent in the monthly salaries and also increased the players' Test, ODI and T20 fees by around 20 percent.

The source added the list of players, to be given the central contracts, has been prepared and should be announced by Tuesday.

"The main thing is that Umar Akmal and Abdul Rehman have been placed in category B of the contract while Shahid Afridi despite being dropped for the Champions Trophy is retained in category A," the source said.

Afridi, Misbah, Hafeez, Saeed Ajmal and Younis Khan are placed in category A of the contract and have been given a 15 percent raise in their existing monthly salary.

Comments
Topics mentioned in this article
Cricket ICC Champions Trophy 2013 Zulqarnain Haider Mohammad Hafeez New Zealand Cricket Team Pakistan Cricket Team World Cup 2011
Get the latest updates on ICC T20 Worldcup 2022 and CWG 2022 check out the Schedule, Live Score and Medals Tally. Like us on Facebook or follow us on Twitter for more sports updates. You can also download the NDTV Cricket app for Android or iOS.