Our campaign is back on track, says Strauss

England captain Andrew Strauss was a delighted man after his team defeated South Africa by six runs in a thrilling low-scoring World Cup encounter at the Chepauk on Sunday. 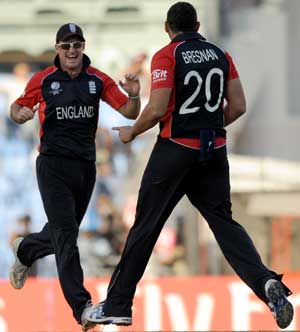 England captain Andrew Strauss was a delighted man after his team defeated South Africa by six runs in a thrilling low-scoring World Cup encounter at the Chepauk on Sunday.

"Our guys showed a lot of fighting spirit. We needed that after our defeat against Ireland. A win is all you need to kick-start things. I hope our campaign is back on track," Strauss said at the post-match presentation ceremony.

The England captain however admitted that the Chepauk wicket was an easy one to bowl on.

"At the break, we knew that the wicket would deteriorate. However it was criminal to lose three quick wickets when we batted. But it was an easy wicket to bowl on. Swann was outstanding and the seamers banged the bowl at length," the England captain added.

England will now take on Bangladesh at Chittagong and Strauss said that the next four five days will be a welcome break as it would give them chance to regroup.

His opposite number Graeme Smith termed the encounter as a "good game" but was disappointed to be on the losing side.

"We did well for the most part of the game. We started very well with our batting but lost a few wickets in the middle and things became tough. Chasing was difficult on this track. But there are a few things we need to improve before we play our next game against India," Smith said.

Ravi Bopara who was adjudged man-of-the-match for his 60 on a difficult track was surprised with the amount of turn that was on offer.

"I was surprised with the amount of turn that was on offer. Me and Trotty (Jonathan Trott) were looking at a total of around 200 which would have been tough to chase. At the beginning, I didn't expect to come out to bat at the score of 15 for three especially with the top quality batsmen that we have. Basically, I was very that I was back in the playing XI," Bopara stated.

Comments
Topics mentioned in this article
World Cup 2011 Cricket England Cricket Team South Africa Cricket Team Andrew Strauss
Get the latest updates on ICC T20 Worldcup 2022 and CWG 2022 check out the Schedule, Live Score and Medals Tally. Like us on Facebook or follow us on Twitter for more sports updates. You can also download the NDTV Cricket app for Android or iOS.