Indian-American fans here celebrated India's victory over Pakistan in the high-voltage World Cup semi-final match and lauded the "combined effort" by the players that took the team to the final of the tournament. 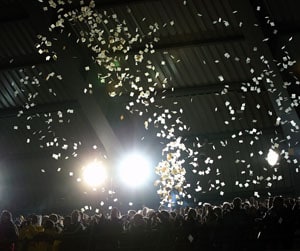 Indian-American fans here celebrated India's victory over Pakistan in the high-voltage World Cup semi-final match and lauded the "combined effort" by the players that took the team to the final of the tournament.

"It was an excellent experience. The way the team played, it took our breath away," Manas Sahu, President of the Massachusetts State Cricket League. told PTI here.

Sahu said India's experience saw them through the game. "India never gave up and it was a combined effort. The bowlers, who are often overshadowed, delivered today," Sahu said, adding the whole match was "played in a good spirit."

"Every Indian I saw out on the streets had a smile on his face and only an Indian could tell the reason for that," Sahu says with evident pride.

"We may be friends with Pakistanis here but when it comes to an India-Pakistan match, it is a different ball game. Then we are rivals," he said, adding with a laugh that then the friendship takes a back seat.

Radhika Sharma, a scientific associate at pharma major Novartis, said the entire Indian team played "to the best of its ability".

"The bowlers bowled really well, they did not let the Pakistanis score and Shahid Afridi's wicket was a life saver," she said.

Thousands of miles away from all the frenzy and action, Indians living here ensured that they did not miss out on the most awaited match of World Cup 2011, even if it meant taking a day off from work.

Scores of Indians either worked from home or took the day off and postponed business meetings. As Sahu, an IT professional, put it, "March 30 must have been the most unproductive day in the world for the IT field."

Clearly an India-Pakistan match takes precedence over all else. Indians gathered with friends, some setting up huge screens in the basement of their homes, to watch the "mother of all clashes."

As victory inched closer, they celebrated by beating drums, shouting slogans for India and with standing ovations. Sahu said he had set up a Facebook page where Indians could voice their feelings and emotions.

Comments
Topics mentioned in this article
World Cup 2011 India Cricket Team Cricket
Get the latest updates on ICC T20 Worldcup 2022 and CWG 2022 check out the Schedule, Live Score and Medals Tally. Like us on Facebook or follow us on Twitter for more sports updates. You can also download the NDTV Cricket app for Android or iOS.