Not thinking of India yet, says Afridi

Pakistan captain Shahid Afridi is not concerned about a possible World Cup semifinal showdown against India, saying his immediate focus was on beating the West Indies. 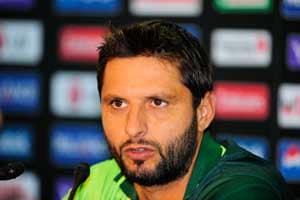 Pakistan captain Shahid Afridi is not concerned about a possible World Cup semifinal showdown against India, saying his immediate focus was on beating the West Indies.

Pakistan start firm favourites in Wednesday's quarter-final against Darren Sammy's men at the Sher-e-Bangla stadium after topping Group A with five wins in six matches.

One of those wins broke Australia's unbeaten streak of 34 World Cup matches over a 12-year period after the three-time defending champions went down by four wickets in Colombo on Saturday.

A win over the West Indies could have Afridi's men a mouth-watering semifinal against arch-rivals India, if the co-hosts beat Australia in Thursday's quarterfinal in Ahmedabad.

"Our entire focus is on winning the quarterfinal, I am not even thinking of the next match, whether it is India or Australia," Afridi told a packed news conference.

"We will not take the West Indies lightly. Any team is capable of winning on their day; there are no second chances in a knock-out match. I think they are a very good side."

The West Indies collapsed from winning positions against England and India, and only qualified for the quarterfinals on superior run-rate after ending the league level with Bangladesh on six points.

The impressive run by Afridi's team would have delighted their volatile nation, which has been stripped of big-time cricket at home due to security concerns and tainted by an unsavoury spot-fixing scandal.

The absence of former captain Salman Butt and pace spearheads Mohammad Aamer and Mohammad Asif due to the controversy was not felt as the team has rallied superbly under their inspirational captain.

All-rounder Afridi is the tournament's leading bowler with 17 wickets with his fastish leg-breaks, while seamer Umar Gul has kept the pressure on at the other end with 13 wickets.

Afridi may have failed with the bat so far with just 65 runs in six games, but young guns Umar Akmal and Asad Shafiq have shone brightly in their first World Cup.

Akmal has scored 211 runs at 52.75 and Shafiq averages 124 in the two games he has played so far, while seasoned seniors like Misbah-ul Haq and Younis Khan have lent solidity to the middle-order.

"Our success so far has been entirely due to the bowlers, who have done a very good job," said Afridi. "I myself have not batted well and will focus on that tomorrow."

"I know how important my batting is for the team and I will try to get some runs on the board."

Afridi played down suggestions that the West Indies will be hard to beat at a venue where they shot out Bangladesh for their lowest one-day total of 58 in the league to romp home by nine wickets.

"That was Bangladesh, this is Pakistan," the captain said. "It's not that we are playing for the first time in these conditions. We feel at home anywhere in the sub-continent."

Afridi said he had never seen Pakistan work so hard at their cricket, which has been rewarded by the good results so far.

"I have played for 14 years and never seen the team train so seriously and focus on their game," he said. "The entire team is together in the dream to do well in the World Cup.

"Our aim at the start was to make the semifinals and I am confident we can achieve that. The expectations back home are high and we are determined not to let our supporters down."

Comments
Topics mentioned in this article
Shahid Afridi New Zealand Cricket Team Pakistan Cricket Team World Cup 2011 India Cricket Team Cricket
Get the latest updates on ICC T20 Worldcup 2022 and CWG 2022 check out the Schedule, Live Score and Medals Tally. Like us on Facebook or follow us on Twitter for more sports updates. You can also download the NDTV Cricket app for Android or iOS.