No need to panic but play according to situation: Akram to Pak

There is no need for Pakistan to press the panic button following the morale-shattering defeat against New Zealand but the skipper must have plan B ready if pre-planned things go wrong, fast bowling great Wasim Akram said on Wednesday. 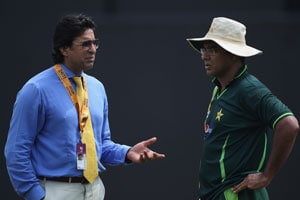 There is no need for Pakistan to press the panic button following the morale-shattering defeat against New Zealand but the skipper must have plan B ready if pre-planned things go wrong, fast bowling great Wasim Akram said on Wednesday.

"I think we lost the match when New Zealand very intelligently took their batting power-play. Our think-tank panicked and exhausted the overs of all the main bowlers including our best bowler Umar Gul and that led to mayhem," Akram said.

"I think there is a clear need for the captain to handle the pressure on the field when the situation changes. At times I get the feeling that everything is decided before hand and when things to start go wrong there is no change of mind or the inclination to take decisions as the situation warrants," he told Geo Super Channel.

He also advised the Pakistan team to rely more on their bowling strength and remain in attacking mode.

"The team is good and if the combinations are right we can still go a long way in this tournament. No need to panic." Akram also urged the cricket crazy fans not to overreact after the big defeat.

"I would like to appeal to our people not to take any defeat or bad performance to heart and react like the Bangladeshi fans did. Our team is a good team but in sports the other team also comes into win. We must learn to be patient and back our players all the way. I don't think hooliganism of any sort should be tolerated in any sports."

"I have never subscribed to this sort of reaction by the cricket lovers. They must understand that at the end of the day it is sports and even players can have really bad days but these same players also bring lot of joy and celebration for their countrymen," he noted.

He also expressed disappointment over the stoning of the West Indies team bus in Dhaka by angry Bangladeshi cricket fans after the hosts by a big margin last week. "Wherever such incidents happen it is most unfortunate because players lives are at stake and the organizers must make security for the teams tighter," he said.

Wasim, who himself has twice come under fire and had his home in Lahore attacked by angry cricket fans after the 1996 and 1999 World Cups when he was captain said the most unfortunate part was that miscreants targeted families of the players.

Comments
Topics mentioned in this article
Cricket Wasim Akram New Zealand Cricket Team Pakistan Cricket Team World Cup 2011
Get the latest updates on ICC T20 Worldcup 2022 and CWG 2022 check out the Schedule, Live Score and Medals Tally. Like us on Facebook or follow us on Twitter for more sports updates. You can also download the NDTV Cricket app for Android or iOS.