Australian coach Tim Nielsen has challenged skipper Ricky Ponting to strike form with a trademark innings against India in the quarterfinals of the World Cup on Thursday. 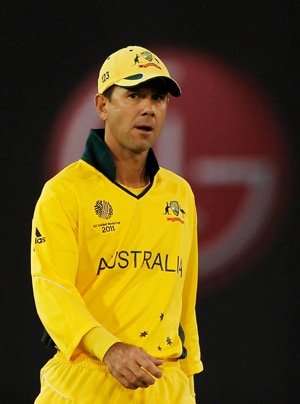 Australian coach Tim Nielsen has challenged skipper Ricky Ponting to strike form with a trademark innings against India in the quarterfinals of the World Cup on Thursday.

Nielsen's challenge for Ponting comes after Australia's 34-match unbeaten run in the World Cup came to an end Saturday against Pakistan and their 12-year-old grip on the World Cup would also come to an end if they lose against India at the 50,000-capacity Sardar Patel Stadium here.

Ponting has had a horrid run during the World Cup and has scored 102 runs from five innings at an average of 20.40.

Against India, perhaps it will be the right platform for Ponting to get back his form. India have never faced Australia in the World Cup since the 2003 final, when Ponting blasted a majestic 140 not out from 121 balls. The knock is still widely regarded as his greatest one-day innings and statistics show that Australia have won 24 of 29 ODIs when Ponting hit a century.

"It would be nice for Ricky to get a good score. It's important for us that one of our top three or four get a big score. It would be nice for Shane (Watson), Brad Haddin, Ricky or Michael Clarke (to score runs). We do put a lot of emphasis on our top four," said Nielsen.

Nielsen said playing in front of a packed crowd will not only be a challenge for India, but for them as well.

"The adrenalin will certainly be flowing and playing in front of their home crowd in Ahmedabad will be exciting and a challenge for us. It's what World Cups are about, it's the right time to play India. We've got no fear," he said.