Irish cricketer Niall O'Brien's bats, which went missing after his team's World Cup group match against India, have been found. 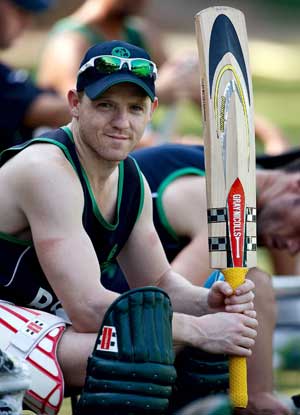 Irish cricketer Niall O'Brien's bats, which went missing after his team's World Cup group match against India, have been found.

Ireland's media manager Barry Chambers said the bag containing six bats of the player has been found and would be reaching the player soon.

"Niall's bag contained six Gary Nicollas bats including one given to him by India's Suresh Raina have been traced in the luggage of the Indian team," Chambers said.

He claimed there was no truth in reports that suggested that Niall had cooked up the story that his bags had gone missing as he was upset over his run out and the loss to India on Sunday.

The reports had suggested that O'Brien lost his temper and broke the glass door of the dressing room during the match against India in Bangalore.

Comments
Topics mentioned in this article
Niall O'Brien India Cricket Team Ireland Cricket Team World Cup 2011 Cricket
Get the latest updates on India vs South Africa and check out  Schedule, Results and Live Score. Like us on Facebook or follow us on Twitter for more sports updates. You can also download the NDTV Cricket app for Android or iOS.