New Zealand Prime Minister John Key was "delighted" with an invitation to witness his country play Sri Lanka in Tuesday's World Cup semifinal, but logistics will keep him away. 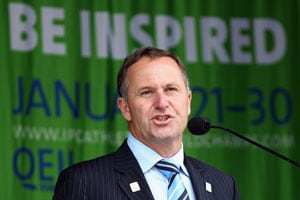 New Zealand Prime Minister John Key was "delighted" with an invitation to witness his country play Sri Lanka in Tuesday's World Cup semifinal, but logistics will keep him away.

Sri Lanka President Mahinda Rajapakse, who invited Key on Sunday, said the New Zealand premier was keen to visit, but he had just returned to the capital and there was no possibility that he could make Sri Lanka by Tuesday.

"He has said that he was delighted with the invitation, but he is unable to make it in time due to logistical problems," the president told foreign correspondents at his residence on Monday.

The 1996 champions will tackle New Zealand on Tuesday for a place in the final. The Black Caps had knocked South Africa out of the World Cup by defeating them by 49 runs on Friday.

Sri Lanka will meet New Zealand for a second time in the current World Cup after their 112 run victory over the Black Caps in their Group A match in Mumbai on March 18.

The winner of Tuesday's semifinal will meet the winners of Wednesday's clash between India and Pakistan.

Comments
Topics mentioned in this article
Pakistan Cricket Team New Zealand Cricket Team Cricket World Cup 2011
Get the latest updates on ICC T20 Worldcup 2022 and CWG 2022 check out the Schedule, Live Score and Medals Tally. Like us on Facebook or follow us on Twitter for more sports updates. You can also download the NDTV Cricket app for Android or iOS.