Never got five 'lives' in one innings, admits Tendulkar

Sachin Tendulkar was honest in admitting that never in his 21-year career has he got reprieve as many as five times in one innings. 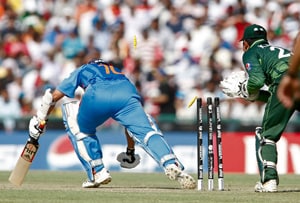 Sachin Tendulkar was honest in admitting that never in his 21-year career has he got reprieve as many as five times in one innings.

"Five lives! God has been kind to me. It is not something which has happened to me earlier," Tendulkar said during a post-match interview. (In pics:'Sachin's Lives')

Sachin referred to the four catches and one stumping chance missed by the Pakistan fielders during his innings of 85 runs.

Sachin however, survived yet another scary moment when he was adjudged leg-before-the-wicket by umpire Ian Gould off the bowling of spinner Saeed Ajmal. With just one review remaining for the Indians, it was a gutsy call to go upstairs, especially considering the fact that the impact seemed extremely close initially. But as destiny would have it,Â  hawk eye showed that the ball was missing the wickets, much to the misery of the Pakistan bowlers.

About the upcoming final against Sri Lanka, Tendulkar said,"Hopefully, we will put our best performance in all three departments. Sri Lanka are a great team. They play well and know the conditions well. It will be a wonderful occasion to play the final in Mumbai. All we would like is to remain calm and focussed and get the job done." For someone who has been a member of the side that has won all its five World Cup matches against Pakistan, the legendary batsman was quick to admit that it would be a "memory that he would always cherish."

Someone who has always put the team before individual performance, Tendulkar lavished praise on young Suresh Raina whose unbeaten 36 provided necessary impetus during the death overs.

"Raina played a special knock. When we started batting, I felt that 310-315 was par-score. But as the spinners came on the ball was stopping and coming. Then I thought that 265-270 will be a good score to defend," Tendulkar stated.

For him Virender Sehwag's blitzkrieg at the onset gave him and others that extra bit of time to check out on how to proceed with the innings.

"Viru got us off to a flier but then we needed to assess the situation. It was a difficult wicket to bat on and we needed to put up a good score. Full credit to our bowlers as they put up a fabulous show."

Skipper Mahendra Singh Dhoni also spoke in the same vein about how the wicket slowly became difficult to bat on as the match progressed.

"If you take the opening partnership out, you would find that 260 was a good score to defend. May be we could have got another 20-30 runs," was what the skipper assessed.

The skipper admitted that his reading of the pitch was wrong but his seamers did a good job.

"We read the pitch wrong but then our seamers bowled exceptionally well. That is why I didn't need to use a sixth bowler. We don't have any bowler who regularly hits 140 plus.

"We have bowlers who have variations and can change plan accordingly. Ashish is a rhythm bowler and Zak (Zaheer) is really goood with his variation. Even Munaf's strength is bowling wicket to wicket as he has become really smart after playing in IPL."

Comments
Topics mentioned in this article
Sachin Ramesh Tendulkar World Cup 2011 India Cricket Team Pakistan Cricket Team Cricket
Get the latest updates on India vs South Africa and check out  Schedule, Results and Live Score. Like us on Facebook or follow us on Twitter for more sports updates. You can also download the NDTV Cricket app for Android or iOS.