Injury concerns over Muttiah Muralitharan and Angelo Mathews have forced the Sri Lankan team to call up Chaminda Vaas and Suraj Randiv as standbys ahead of the World Cup final against India on April 2. 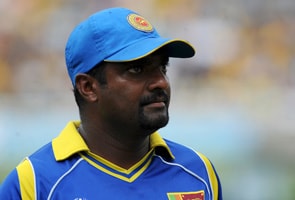 Injury concerns over Muttiah Muralitharan and Angelo Mathews have forced the Sri Lankan team to call up Chaminda Vaas and Suraj Randiv as standbys ahead of the World Cup final against India on April 2.

Muralitharan has struggled with niggles through the course of the tournament, including a hamstring injury, a side strain, a troublesome knee and a groin issue. There was speculation that he would be rested for the semi-final against New Zealand in a bid to allow him time to be fully fit for the final. Muralitharan, however, played in the semi-final in Colombo, despite not being in the best physical condition. The final, if he plays in it, will be Muralitharan's last international game.

Mathews left the field with a minor injury to the thigh when Sri Lanka were fielding, and was visibly hampered for movement when he later came out to bat with a runner. Mathews has played a crucial role in Sri Lanka's campaign, both as a back-up seamer and in the middle order, and his versatility will be tough to substitute.

Left-arm seamer Vaas, 37, last played an last international game in July 2009, and hasn't featured in an ODI since August 2008. He was contemplating retirement following his omission from the original World Cup squad. Offspinner Randiv was a regular member of Sri Lanka's limited-overs' side last year, but missed out on a World Cup spot to Rangana Herath and Ajantha Mendis, who were picked ahead of him as the spinners to support Muralitharan.

Comments
Topics mentioned in this article
World Cup 2011 Munaf Patel Ashish Nehra Gary Kirsten India Cricket Team Pakistan Cricket Team Cricket
Get the latest updates on ICC T20 Worldcup 2022 and CWG 2022 check out the Schedule, Live Score and Medals Tally. Like us on Facebook or follow us on Twitter for more sports updates. You can also download the NDTV Cricket app for Android or iOS.