Listen to the latest songs, only on JioSaavn.com
World Cup 2011 19 Feb 11 to 02 Apr 11
Sports Home
Story ProgressBack to home

Mohali Weather: With the pressure mounting ahead of the all important semi final match between arch-rivals India and Pakistan, the weather gods decided to play their part too. 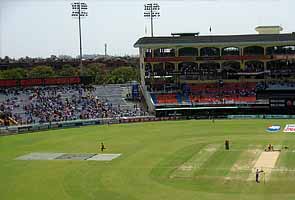 With the pressure mounting ahead of the all important semi final match between arch-rivals India and Pakistan, the weather gods decided to play their part too. Mohali received some heavy rain and thunderstorms last night.

However, no need for fans to get disappointed. The sun was out in full force on Wednesday. The match is expected to begin on schedule. The weatherman though has said that there is a slight possibility of a light shower in the evening. However even if the match is called off due to rain -- there is a reserve day (Thursday) when the match can be played.

The Meteorological Department has forecasted a partly cloudy sky to prevail in this region with a little chance of light rain by Wednesday evening.

According to the MeT's area forecast, including that of entire Punjab, there could be dust storm or thunderstorm with light rain at a few places in the state today.

According to the Mohali pitch curator Daljit Singh, ball is likely to seam around under the flood lights.

What if it rains today?

Even though the Met department says it is unlikely, if today's match is rained out, then there is a reserve day - on Thursday when the match can be played. But, if Thursday is also washed out by rain, then the rule states, "If following a tie, weather conditions prevent the one over eliminator from being completed, or if the match is a no result, then the team that finished in the higher position in the Group stage shall proceed to the final."

So, if the weather gods are really unkind, it will be heartbreak for India, and Pakistan will make the finals.