Around 3,000 police will patrol Wednesday's high-profile India-Pakistan World Cup semi final, the first match between the two arch-rivals on Indian soil since the 2008 Mumbai attacks. 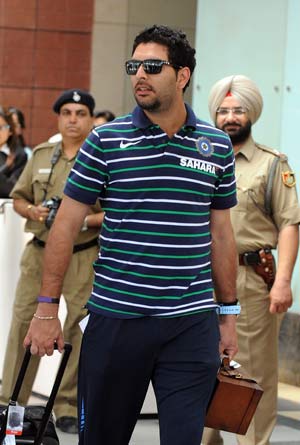 Around 3,000 police will patrol Wednesday's high-profile India-Pakistan World Cup semi final, the first match between the two arch-rivals on Indian soil since the 2008 Mumbai attacks.

Some 2,000 security personnel are expected to be deployed in and around the 30,000-capacity PCA (Punjab Cricket Association) Stadium on matchday.

An estimated 1,000 police have already descended on the luxury Hotel Taj in nearby Chandigarh where both teams are staying, a force which includes Indian army commandos.

The game, which takes place in the border state of Punjab, has already sparked a flurry of diplomatic activity.

India Prime Minister Manmohan Singh engaged in a little "cricket diplomacy" on Friday by issuing an invitation to the match to his Pakistan counterpart Yousuf Raza Gilani and President Asif Ali Zardari.

The invitation comes while relations between the two nations are still tense following the attack by Pakistan-based Islamist militants on Mumbai in 2008 that left 166 people dead.

"I propose to be at Mohali to watch the World Cup semi-final match," said Singh in his invitation.

"There is huge excitement over the match and we are all looking forward to a great game of cricket, that will be a victory for sport," he added.

"It gives me great pleasure to invite you to visit Mohali and join me and the millions of fans from our two countries to watch the match."

Pakistan opener Mohammad Hafeez insisted he no qualms about the security situation.

"We have no fear or a feeling of (any) shortcoming when it comes to security," he said on Saturday.

"That's not our job; our job is to play cricket. To provide security is the responsibility of the ICC (International Cricket Council) and the BCCI (Board of Control for Cricket in India).

"We are very happy and we are enjoying ourselves very much."

Elsewhere, the race was on to secure scarce tickets and hotel rooms.

Fans continued to queue at the ground on Saturday even though the PCA had insisted as early as Tuesday that the 14,000 available tickets at the 30,000 capacity stadium had been sold, with the rest in the hands of the ICC.

But some supporters simply refused to believe tickets were no longer available.

"I have been coming here since Monday, but have not been able to get any ticket," Vikas Sharma, a businessman, told the Press Trust of India.

However there have been numerous reports of a thriving black market in tickets for the showpiece encounter with prices rocketing 10-fold.

But even if this match was being played at the 70,000-capacity Eden Gardens in Kolkata, police and officials would have a job on their hands to combat the black market, such is the passion for cricket in both India and Pakistan and the rivalry between the nuclear powers.

As it is, with most local hotels already booked out and the Airports Authority of India inundated with requests from the country's super-rich to land their private jets, there are concerns as to how Pakistani fans, scrambling for visas, will be supervised.

Officials are anxious to avoid a repeat of incidents in 2005 when some Pakistan fans in India disappeared only to be arrested for alleged involvement in terror activities or overstaying their visa.

Comments
Topics mentioned in this article
Cricket World Cup 2011 Punjab Cricket Association Stadium, Mohali New Zealand Cricket Team India Cricket Team Pakistan Cricket Team
Get the latest updates on ICC T20 Worldcup 2022 and CWG 2022 check out the Schedule, Live Score and Medals Tally. Like us on Facebook or follow us on Twitter for more sports updates. You can also download the NDTV Cricket app for Android or iOS.