Misbah not worried by batting numbers

Misbah-ul-Haq is not impressed by statistics and he doesn't care about history either. That helps, particularly with an India-Pakistan match due to break out at the World Cup within three days. 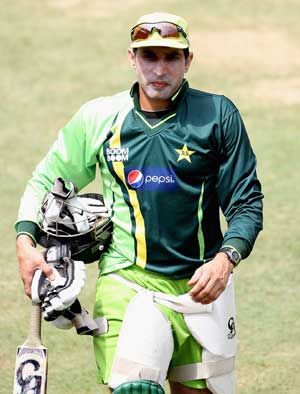 Misbah-ul-Haq is not impressed by statistics and he doesn't care about history either. That helps, particularly with an India-Pakistan match due to break out at the World Cup within three days.

One of the anchors of Pakistan's batting and the man with the team's top score in the World Cup so far - 83 not out against Sri Lanka - Misbah said numbers could be meaningless if they did not agree with the results column. Pakistan's certainly don't.

Umar Akmal is their heaviest run-scorer in this World Cup, but he is placed as low as 28th in the list of top run-getters. Never mind the batsmen from Test-playing nations, Umar follows players from Netherlands, Kenya, Zimbabwe and Canada in the table.

Umar has scored 211 runs from five innings, with a single half-century. Among his team-mates, he is followed by Misbah (192), Kamran Akmal (188), Younis Khan (172), Mohmmed Hafeez (172), Asad Shafiq (124 from two innings) and Abdul Razzaq (101). Of the batsmen, only Misbah and Younis have scored more than one fifty in the tournament, and the team have managed nine overall. When compared to India, those are paltry figures: India have five centuries, ten fifties and five India batsmen have scored more runs than Umar.

Yet Pakistan finished at the top of their group and, regardless of the weakness of some of its Associate opposition, had the more emphatic first four weeks of the tournament between the two teams. In Mohali, after a lengthy round of football, fielding and then the conventional nets, Misbah deconstructed the numbers down to their bare basics. "According to me, the most important thing for any team is winning. If we don't score a hundred and win the World Cup, then that is very good for us. If we score centuries and get knocked out of the tournament, then it's no use."

In India, Misbah's public persona is built on the image of the man who tried the scoop shot and failed, handing India the World Twenty20 title in 2007. In person, he carries himself with gravitas; he speaks slowly but certainly. He will be beaten in any words-per-minute contest by his captain Shahid Afridi or Younis. But should it last longer than fifteen minutes, Misbah would probably still be holding his own. Like he has done through his career, this is the man for the long haul. He has been central to Pakistan's progress in the World Cup, where their batting may not look like a flashy suit, but its main thread holds strong.

"It's really a plus for teams whose batsmen are in form, are scoring centuries and are in the top 20 run-scorers, but winning is important," Misbah said. "If you score a fifty or even a timely twenty or thirty that is vital for a victory, then that's good enough for the team." This under-the-radar cricketing approach has worked for Pakistan, particularly after the horrors of the England tour now called the 'spot-fixing series.' Pakistan have won 14 of their 31 ODIs since the 2010 Asia Cup, their batsmen have managed totals of more than 250 the same number of times, with Pakistan winning nine of those games.

The Pakistan batsmen could find the best batting conditions they have encountered so far in the tournament in Mohali, after spending five weeks grinding it out on slow, low tracks in Sri Lanka and Bangladesh. The lack of pace off the pitches has been, Misbah said, a "struggle". In some parts of the subcontinent, contrary to the stereotype, "runs don't come easy," Misbah said. "The ball is turning, the bounce is low, so just like when we go outside these conditions and struggle against bounce and pace, scoring runs here on these wickets is an art too. And those who know how to play on low-bouncing wickets, they can do well and score runs. But batting can be a struggle." It is why this has been far from a batsman's World Cup.

In Sri Lanka, Misbah said, batsmen required a "tightness" of play. "The new ball seams, the spinners get help later and you have to work as a batsman, because the tracks help bowlers of both types." In Bangladesh, he said, batsmen needed to be patient, to adjust. "Because of both low bounce and turn, batting requires you to really spend time and build an innings."

Pakistan's players have watched several of the World Cup matches held in India, and Misbah said the variety he saw across venues meant there never really was one defined 'type' of Indian pitch.

Once upon a time Mohali had a 'type': quick, bouncy and friendly for the fast men. That legend has faded and it is what India, in particular, will be pleased about, as batsman for batsman and numbers for numbers, they will believe they are better than their semi-final opponents.

Pakistan need not have bothered to haul over a slab of black stone to be put to use in the nets. The throwdowns given to every batsman on one of the practice pitches were made to pitch on the stone, Misbah explained, to generate bounce that the practice wickets did not quite contain. The real wicket probably won't contain it either.

Of the World Twenty20 final which he had all but snatched away from India before that last-over shot, Misbah said: "You can't just stick to the past. Every game is a new game, it's not like this game is important because of that match. To us every game is special. This one especially; this is the World Cup, it is a semi-final. I really want to do well."

Memory is a meaningless ghost for a cricketer like Misbah, who has had an up-and-down career, at one stage dropped from the Test and one-day squads only to return as Test captain. There was speculation that he may have been handed the role of one-day captain as well for the World Cup, but the selectors stuck with Afridi, who is never under the radar, but in this World Cup has not come through as the destructive batsman the world knows he can be. He has only 65 runs at 10.83 in the tournament, but the strike-rate monster that lurks within him may just light up at the sight of the handkerchief-sized ground in Mohali.

From being under the radar for over five weeks, Misbah and his team will now face the floodlights in a World Cup semi-final at a stadium which may have a low capacity, but will have a heavy-duty crowd.