Low-profile coach Gary Kirsten's methods of ensuring a high success rate have won him many fans within the Indian team. 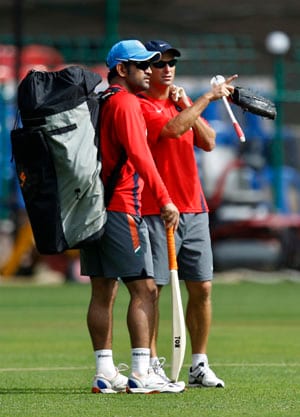 Low-profile coach Gary Kirsten's methods of ensuring a high success rate have won him many fans within the Indian team.

The likes of captain Mahendra Singh Dhoni, Sachin Tendulkar and Gautam Gambhir have acknowledged his role in instilling a team spirit and work ethic that has seen India become the world's top test side and number two in one-dayers.

Kirsten took over at a time of flux a little over three years ago and transformed a talented group into a champion side.

He is known to have eased insecurities and taken India to a stage where it is a favorite at this World Cup.

While Indians cross their fingers that Tendulkar will finally win a World Cup, Kirsten will also be aiming to sign off in style.

"I have enjoyed my game under him," Tendulkar said recently, when asked about Kirsten, against whom he played several international matches. "He is really putting in a lot of effort."

Kirsten can be seen throwing the ball at the nets at batsmen, either ironing out weaknesses or preparing them to face particular types of bowling.

He enjoys a good rapport with players, in contrast to his predecessor Greg Chappell of Australia.

In fact, Kirsten is known to have spoken to senior players before taking up the job and maintained a persona similar to that of Kiwi John Wright, who was the coach when India played in the final of the 2003 World Cup.

When Kirsten took over, an experienced Indian team had been knocked out early from the 2007 World Cup, but a Dhoni-led India side had won the Twenty20 World Championship.

One of his challenges was to ensure a good rapport among the senior and junior players.

Dhoni says Kirsten is the best thing to happen to Indian cricket in recent years.

"He has given the Indian team whatever he could, the best he could, and of course it was a pleasure to have him in the side," said Dhoni.

India's rise has been largely because of winning abroad during Kirsten's stint, the most recent being a creditable drawn series in South Africa.

"Gary is the best coach that India has ever had," Gambhir said recently. "I have often said that and I keep on stressing that we need Gary."

Gambhir, also a left-handed top-order batsman like Kirsten, has blossomed in this period.

"I don't need to speak much about him. His fabulous record speaks for itself. He has been a great man-manager," said Gambhir, adding that he would want Kirsten retained after his contract ends this World Cup.

But sadly for the team, Kirsten has informed the Indian board that he does not want to continue after this World Cup because of family commitments.

Comments
Topics mentioned in this article
India Cricket Team Gary Kirsten World Cup 2011 Cricket
Get the latest updates on ICC T20 Worldcup 2022 and CWG 2022 check out the Schedule, Live Score and Medals Tally. Like us on Facebook or follow us on Twitter for more sports updates. You can also download the NDTV Cricket app for Android or iOS.