Haroon Lorgat, the ICC chief executive, has come out in strong support of the format of the ongoing World Cup, which has been criticised for being longwinded and not beneficial for teams looking to build momentum. 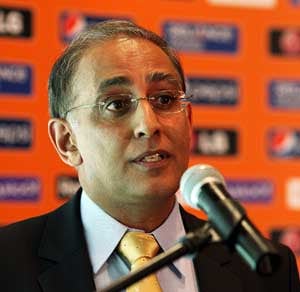 Haroon Lorgat, the ICC chief executive, has come out in strong support of the format of the ongoing World Cup, which has been criticised for being longwinded and not beneficial for teams looking to build momentum.

Lorgat defended the ICC's formula, stating that it was the only way organisers could keep interest alive in the first World Cup to involve 14 teams. "In the current schedule there was no other way we could do it with 14 teams participating and us wanting every match to be a flagship match. So we were not keen to duplicate matches on the same day," Lorgat said.

During the group stages teams played six matches over the course of a month, which led to Ricky Ponting and Kevin Pietersen questioning the format's relevance. Early on in the tournament, Pietersen called England's schedule "ridiculous". In his column in the Australian this week, Ponting had criticised the format saying: "The lead-up to this point has been long and trying, too much waiting around and not enough cricket. You like to build up to your best form in a tournament like this, but the way this one has gone it has been almost impossible for us to get up any momentum."

Lorgat said, however, that the feedback he had received contradicted the opinion of some players. "I have also got feedback from a number of teams that they are satisfied with the schedule, and that it allowed them to recover from little niggles. In fact, I recall MS Dhoni in particular being pleased with this schedule. So any professional sportsman who values a big competition will accept the schedule and play to the best on the day that is required."

The other point of debate that has carried on through this World Cup is the future of the Associates in the wake of the ICC's decision to limit the number of teams to 10 in the next edition of the tournament in 2015. But Ireland's convincing display in this tournament, which included their upset win over England, has raised questions about the viability of the ICC's decision. Lorgat said in the light of Ireland's performance, the issue of the 'qualification' process of the World Cup would be debated logically by the ICC board.

"That is still a significant topic to consider in terms of qualification for what we have said would be a 10-team World Cup. In that debate we will consider all possibilities. In the second-tier teams Ireland have featured very well, they have done themselves proud. And we want more teams. We want higher levels of competition. One of the reasons was to balance between the quality of the tournament versus the number of teams. And that was the reasoning behind that original decision. That debate is not complete because we still have to decide which ten teams will participate."

Last month Lorgat had told ESPNcricinfo that the ICC would meet in May to draft out the structure of the World Cup from 2015 and beyond, incorporating an ODI league and a clause regarding promotion and relegation into the tournament that could radically alter the course, not merely of the ICC's flagship event, but the 50-over format of the game itself. At the meeting the board would finalise a cut-off for eligibility for the 10 teams due to take part in the 2015 World Cup.

Asked if the ICC's stand on the World Cup qualification process would be supported by full member nations, Lorgat said he would not speculate about what would happen in May. "I don't want to speculate on a debate that is sitting with a sub-committee and coming through the board in due course. I have let the board and the chief executives involved to take a robust approach to their debate and consider the thing fairly."

If there are only ten teams then the World Cup does become compact but the disadvantage is there would be no quarterfinals, a phase that has added intrigue in this editon and re-ignited interest that seemed to have waned during the middle stages of group games. "Those are the balancing acts you have to put together - either you accept the length of the tournament and the beauty of qualifying over a period of four weeks or you expect a short compact tournament where every game counts from the very beginning," Lorgat said.

Meanwhile Lorgat has assured the Pakistan fans and media that, in the event that Shahid Afridi's men make the semi-finals and travel to Mohali, the ICC has put a structure to simplify their visa process. "From the outset we have committed to do the very best to expedite visa issues. We have got processes in place for accredited media and ticket holders to obtain visas."

Comments
Topics mentioned in this article
H Lorgat World Cup 2011 Cricket
Get the latest updates on ICC T20 Worldcup 2022 and CWG 2022 check out the Schedule, Live Score and Medals Tally. Like us on Facebook or follow us on Twitter for more sports updates. You can also download the NDTV Cricket app for Android or iOS.