Indians have talent and history in their favour, but Pakistan have made a strong impact in the tournament. Given the hoopla surrounding today's semi-final, there can be little doubt that the India-Pakistan rivalry is cricket's biggest showpiece event. But while it exceeds the Ashes in terms of number of followers and intensity of passion, it still lags behind in terms of legacy value. 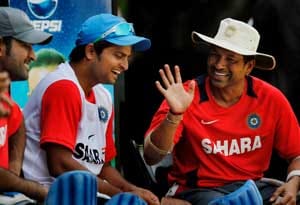 Indians have talent and history in their favour, but Pakistan have made a strong impact in the tournament.

Given the hoopla surrounding today's semi-final, there can be little doubt that the India-Pakistan rivalry is cricket's biggest showpiece event. But while it exceeds the Ashes in terms of number of followers and intensity of passion, it still lags behind in terms of legacy value.

While it's true that Australia and England have been playing each other from more than twice the number of years as India and Pakistan, it's also true that there has not been a concerted effort to build up the brand value of the contest between the sub-continent giants beyond the periodic hype.

Obviously this is not easy to achieve, given the fragile relations between the two countries. Unlike Australia and England, India and Pakistan are not separated by distance to lend objectivity to their history.

Be that as it may, India versus Pakistan in the World Cup has always been a crackling encounter.

The fact that India have won all four times would suggest a one-sidedness which players from both sides would refute: each match was bitterly fought.

The dazzling array of strokes which Sachin Tendulkar and Virender Sehwag unleashed at the Centurion in 2003 to overhaul a stiff total is still fresh in my mind. For sheer tension and intensity, however, I think the quarter-final in Bangalore was just a nudge ahead. But the most significant to my mind was at Sydney in 1992, though the scorecard might reflect a facile victory.

At that point in time, it might be remembered, India were still reeling from the deep psychological blow of Javed Miandad's last ball six in the Australasia Cup final in Sharjah in 1986. Yes, almost six years had passed, but such had been the impact of that one stroke that it seemed Pakistan would always win, whatever the situation.

Sydney 1992 changed that forever. Some of the key protagonists of the 1986 match were still around, most notably Miandad himself, but this time there was to be no 'extra special' performance from him, barring the kangaroo-dance he did in an altercation with Kiran More, which has become one of the more memorable pieces of sports on television.

Pakistan went on to win the World Cup in 1992, but India had made a major gain too. In winning the Sydney game, the spell that Miandad's last ball six had cast on India was dispelled forever. Since then, India have beaten Pakistan in every World Cup encounter, but it would be foolish to read more in this sequence than the fact that India played better on the day: much as they will have to do in today's game at Mohali.

How do the teams square up? Given the depth of experience and talent on paper and form over the past 18-20 months, the semi-final is skewed somewhat in India's favour. But in the five weeks of the World Cup, Pakistan have made such a strong impact that Dhoni's team cannot afford to be off-guard for a moment.

The big question on the eve of the match was about Shoaib Akhtar's inclusion. But while there is an undoubted psychological advantage if he is fit and capable of bowling fast for a full quota of 10 overs, Shoaib would become a liability if he fizzles out after three or four overs.

Conventional analysis suggests that India's strength is in their batting, Pakistan's in their bowling. If Tendulkar, Sehwag, Gambhir, Kohli and Yuvraj provide the kind of runs they have consistently done in this tournament, Pakistan would have a lot of catching up to do.

The flip side of this scenario is that Pakistan's bowlers have picked up early wickets and bowled opponents out more frequently and quicker than any other side. So if India's batsmen don't get the runs they usually do, their bowlers might find defence of a modest total difficult. Of course, such theories and analyses can be blown apart by one outstanding performance from a batsman or bowler from either side.

The biggest determinant in the match will be pressure. I don't mean this in the negative sense.

In sport, high pressure can provide energy, imagination and will power to enable players to perform above potential and circumstance; conversely, the inability to tackle pressure has seen mighty reputations of individual and collective crumble.

The task for players from both teams is cut out.

Comments
Topics mentioned in this article
New Zealand Cricket Team India Cricket Team Pakistan Cricket Team Cricket World Cup 2011
Get the latest updates on ICC T20 Worldcup 2022 and CWG 2022 check out the Schedule, Live Score and Medals Tally. Like us on Facebook or follow us on Twitter for more sports updates. You can also download the NDTV Cricket app for Android or iOS.