Knocking in the questions before the knockouts

A billion people let go off a lazy smile as their favourite men…(in blue) ‘romped?’ the Dutch to reserve a place in the quarters. 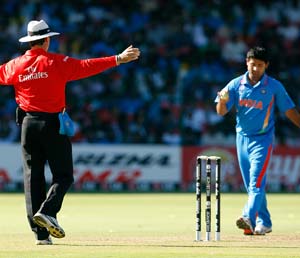 A billion people let go off a lazy smile as their favourite men...(...in blue) 'romped?' over the Netherlands to reserve a place in the quarter-finals.

The men in blue become the first team to qualify with the highest team total in the tournament so far. They have the distinction of having the highest individual scorer in Virender Sehwag and the second farthest six hitter in Yusuf Pathan. They have Yuvraj whose all-round abilities are becoming legendary. And they have Sachin Tendulkar - end of discussion.

Habits die hard so blasphemy it is. Point one: Where is Ashwin? The question has done more rounds in the cricketing circle in the last two weeks than Yuvraj seems to have of his garden in the last...umm well however young he may be.

Point two: What happened to Geeta Basra? The turbanator needs help and it obviously isn't coming from the pitches.

Point three: Who will stand out and say this is a team game and slam-bam his way to victory than wait for individual milestones to be achieved?

Point four: When will we stop beating around the cricketing bushes and get to see an India-Pakistan match? For a certain Mr Afridi's sake though, I hope it isn't anywhere in India as the country, he seems to concur, is like a back-alley of contempt for his side.

Point five: Why must we see Sreesanth on the camera, sitting on the sidelines, each time India plays a match? Some of us like him screaming, dancing or crying. Sitting idle is just so unlike him.

Anyhow, with the golden rule of journalism applied to the realm of this sport, the answers to most of the above remain elusive. Perhaps, its best not to judge what gods do (assuming cricket is still a religion here).