New Zealand will look to stamp their authority on Zimbabwe when they take on the underdogs in a key World Cup match on Friday which could decide each team's quarter-final hopes. 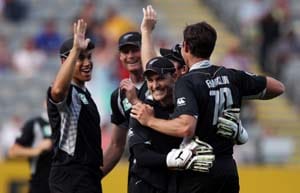 New Zealand will look to stamp their authority on Zimbabwe when they take on the underdogs in a key World Cup match on Friday which could decide each team's quarter-final hopes.

The Kiwis cantered to a 10-wicket victory over lowly Kenya in their opening match before going down to Australia by seven wickets in a manner unworthy of their reputation as a doughty one-day side.

Zimbabwe suffered a 91-run defeat at the hands of holders Australia but regrouped in time to thrash Canada by a 175-run margin in their second Group A clash on Monday.

With one defeat and a win apiece, New Zealand and Zimbabwe are tied on two points and trail Pakistan and Australia who have four points each from two matches.

Sri Lanka also have four points but they have played three games, winning two and losing one.

The match with Zimbabwe affords New Zealand the luxury to try out and nail their final team combination ahead of potentially tougher games against Sri Lanka and Pakistan.

The Kiwis erred in their selection against Australia, picking young Hamish Bennett ahead of a fit Kyle Mills and bringing opener Jamie How down at number seven in place of proven all-rounder Jacob Oram.

Bennett picked up two wickets but was carted for 63 runs in seven overs and How managed 22 in a below-par New Zealand batting performace.

"We wanted to strengthen our batting because we knew Australia would come at us with pace," said captain Daniel Vettori.

"We thought it would be nice to have a guy who can play pace well particularly around that second new ball (after 34 overs). It didn't work."

Apart from selection woes, New Zealand have also their batting to worry about.

Among the top six batsmen, only Jesse Ryder showed some character in making 25 off 31 balls as New Zealand collapsed to 73-6 against Australia before a late rally by Nathan McCullum and Vettori took the total to 206.

"It started with the bat. You've got to get to the 35-over mark with a maximum of three down. If we'd had wickets left we should have been able to get to a competitive 280 or 300."

Zimbabwe thrived on fine performances by their spinners against Canada and will look to rattle the Kiwis with a similar trick.

The African nation is one of the few teams in the competition with a spin-heavy attack which has come good so far on the dusty sub-continental wickets.

Led by the veteran Raymond Price, Zimbabwe spinners did well to restrict Australia to 262-6 and bowl out Canada for 123 off 42.1 overs.

"They're not scared of any big names and while they're a bit of an uneducated cricket nation at the moment because they've been out for so long, they are a dangerous team.

"Obviously come Friday when we've got the new ball in our hands, we have to make sure that we are right on it and don't have a start like we had against Australia."

Comments
Topics mentioned in this article
New Zealand Cricket Team Zimbabwe Cricket Team Pakistan Cricket Team World Cup 2011 Cricket
Get the latest updates on ICC T20 Worldcup 2022 and CWG 2022 check out the Schedule, Live Score and Medals Tally. Like us on Facebook or follow us on Twitter for more sports updates. You can also download the NDTV Cricket app for Android or iOS.