New Zealand's World Cup squad have enlisted the services of a local physiotherapist after their own returned to his earthquake-shattered home in Christchurch. 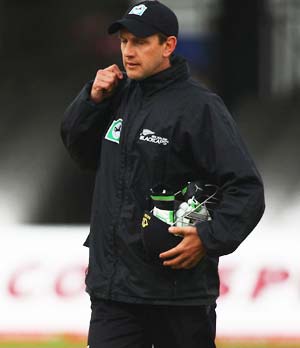 New Zealand's World Cup squad have enlisted the services of a local physiotherapist after their own returned to his earthquake-shattered home in Christchurch.

Physio Dayle Shackel and trainer Bryan Stronach, whose wife is four months pregnant, have both taken a temporary leave of absence from the squad, who face world champions Australia in their second World Cup group fixture at the VCA Ground here on Friday.

"It's been difficult, but it's nothing compared to what people are going through at home," New Zealand captain Daniel Vettori said on Thursday.

"We managed to locate a local physio, he's been great so far."

"If there is a need they (Australia) would provide the support.

"Our physio Dayle had to get back as his property was probably damaged and his family was upset so he went to back to provide some support.

"Similarly, Bryan's wife is four months pregnant and his house has half come down, so he has gone back to take care of his wife."

New Zealand had approached the Board of Control for Cricket in India (BCCI) about using their Kiwi-born academy physio Paul Close but the Black Caps, whose coach John Wright was previously with India, were told he was unavailable because of prior commitments.

Comments
Topics mentioned in this article
New Zealand Cricket Team Pakistan Cricket Team AMI Stadium, Christchurch World Cup 2011 Cricket
Get the latest Cricket news, check out the India cricket schedule, Cricket live score . Like us on Facebook or follow us on Twitter for more sports updates. You can also download the NDTV Cricket app for Android or iOS.