Pakistan leg-spinner Danish Kaneria has urged the team management to persist with the out-of-form wicketkeeper Kamran Akmal in the ongoing World Cup. 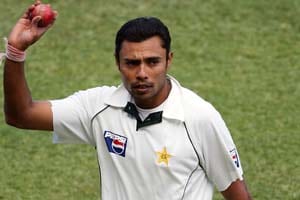 Pakistan leg-spinner Danish Kaneria has urged the team management to persist with the out-of-form wicketkeeper Kamran Akmal in the ongoing World Cup.

Kaneria, who has suffered the most at the hands of wicketkeeper Akmal as far as dropped catches and missed stumpings are concerned off his bowling in the last few years, still feels that Pakistan would make a big mistake if they try out Umar Akmal as a keeper by dropping Kamran.

There are growing voices for dropping Kamran from the team after he dropped New Zealand's centurion Ross Taylor twice in one over of Shoaib Akhtar as Pakistan suffered a big 110-run defeat against the Kiwis.

In general also Kamran's form both as a keeper as well as a batsman has been disappointing in the mega-event so far but when Kaneria felt otherwise.

"Pakistan need to reassess their reaction to the faltering wicketkeeper's promising talent. How feasible is it to break the rhythm of a team which entered the World Cup with a bang?" the leg-spinner told PTI.

"I would still back Kamran simply because of his experience and his immense batting talent. The team management right now needs to offer him maximum encouragement. What he needs now is confidence," he added.

But Kaneria felt that pressing the panic button would not be the right reaction. "It is true that catches win matches and Pakistan lost to New Zealand because we dropped catches but it is also a fact that Kamran offers enormous potential with the bat and he has been with the side for a long time. And we don't have any other specialist keeper in the World Cup squad."

He also added that opting for Umar over Kamran to do the keeping duties would be synonymous to pressing the panic button and would send out a wrong message to the other teams. "This would not only disturb the harmony of the team but will also detrimentally affect the team's unity," he said.

Comments
Topics mentioned in this article
Kamran Akmal Cricket Danish Kaneria World Cup 2011 New Zealand Cricket Team Pakistan Cricket Team
Get the latest updates on ICC T20 Worldcup 2022 and CWG 2022 check out the Schedule, Live Score and Medals Tally. Like us on Facebook or follow us on Twitter for more sports updates. You can also download the NDTV Cricket app for Android or iOS.