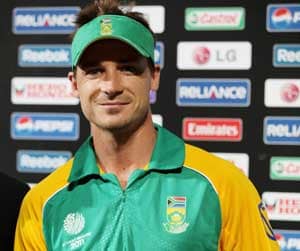 Steyn's 5-50 was key to the Proteas' three-wicket win in Nagpur on Saturday after India had been well set for a huge total when they stood at 267-1.

But India lost their last nine wickets for just 29 runs in nine overs to be bowled out for 296.

"It showed why Dale Steyn is the best bowler in the world and has been for a couple of years now," said Kallis.

"You can never do that with Dale. He is as likely to get you out with the new ball as he is with one that is 100-overs old in his sixth spell."

Kallis also admitted that he was relieved to be back among the runs, making 69 against India, having made a total of just 21 in the team's previous three outings.

"It was a relief to contribute some runs for a change after just making 20-odd before," he wrote in a column for the Hindustan Times.

"There's no doubt that conditions changed significantly during the second innings and batting was more awkward."

Comments
Topics mentioned in this article
Dale Steyn Jacques Kallis World Cup 2011 South Africa Cricket Team Cricket
Get the latest updates on ICC T20 Worldcup 2022 and CWG 2022 check out the Schedule, Live Score and Medals Tally. Like us on Facebook or follow us on Twitter for more sports updates. You can also download the NDTV Cricket app for Android or iOS.