It is difficult to get Indians to enjoy fielding: Robin Singh

Love for fielding cannot be imposed upon. While retired greats are still fitter than most active players, the culture of staying fit even after quitting the sport is rather rare to find in the Asian cricket fraternity. 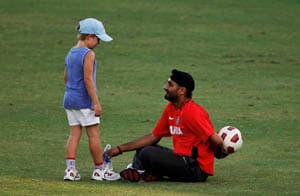 Love for fielding cannot be imposed upon. While retired greats are still fitter than most active players, the culture of staying fit even after quitting the sport is rather rare to find in the Asian cricket fraternity.

Mahendra Singh Dhoni has been bold in admitting that his team lacked athletes. It would be in the best interest of the team for the batsmen to score truckload of runs and provide cushion to his fielders, he has said.

Over the last one week, India have delayed and cancelled a few practice sessions, evoking a strong reaction from the media. It has learnt that no other team has altered schedules, like India have.

Former World Cupper Robin Singh says 'it is more difficult' to get the Indian cricketers to enjoy fielding and training than players from other teams.

"The formula to good fielding is not to treat it like a task or physical stress, it must come naturally," Robin, who was the Indian team's fielding coach for a brief period in 2007 and 2008, told MiD DAY.

"We (Indians) are still behind in the area of fitness when compared to international players. They (Australians) play a variety of sports all the time and it is part of their life. It is ingrained in their system.

Therefore, they are better athletes.

"For us in India, sport is becoming part of our lives only now. We are still trying to integrate it into our system. It is not an overnight process."

"I hope to see young athletes in our country treat fitness as a routine, and not a burden. Our athletes need to manage their fitness levels better.

"We have a long way to go, but things are shaping up well. My advice to every young cricketer is to treat fielding as a challenge and sustain the love for it."

Robin cited Sachin Tendulkar as an example of supreme fitness contributing to a sportsperson's success and endurance.

"Personal pride is another important element in fielding ... If a player starts treating fielding as a burden, he shouldn't be playing cricket," he said.

"The reason for Sachin Tendulkar being so successful is that there is a great synergy between physical, mental, and match fitness in his game.

"Cricketers who are able to maintain this balance are the ones who maintain high standards over a long period of time."

Asked if he had trouble training any player during his stint with the Indian team, Robin laughed and said: "Yes, there were a few, but I am not going to name them."

Comments
Topics mentioned in this article
India Cricket Team MS Dhoni Yuvraj Singh Suresh Raina Robin Singh World Cup 2011 Cricket
Get the latest updates on ICC T20 Worldcup 2022 and CWG 2022 check out the Schedule, Live Score and Medals Tally. Like us on Facebook or follow us on Twitter for more sports updates. You can also download the NDTV Cricket app for Android or iOS.