Giant-killing Ireland have vowed to play aggressive cricket in Sunday's World Cup match against India as they attempt to add the host nation to their list of scalps. 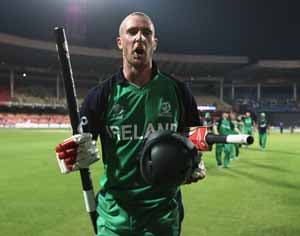 Giant-killing Ireland have vowed to play aggressive cricket in Sunday's World Cup match against India as they attempt to add the host nation to their list of scalps.

The non-Test-playing nation provided the shock of the tournament to stun England by three wickets on Wednesday and all-rounder John Mooney said they would adopt the same fearless approach in Bangalore.

"Our expectations going into the India game will be the same and we will go all out. Every game we play, we play to win," said Mooney, who took four wickets and scored a crucial 33 not out against England.

"We have our own expectations and we don't want to put pressure on ourselves."

Ireland, who lost a close opening match against Bangladesh, has two points from as many games and a win over India would be a major step towards reaching the quarter-finals.

They owed their victory to powerful batsman Kevin O'Brien, who hammered a 50-ball hundred -- the fastest in World Cup history -- as they overhauled England's imposing 327 for eight.

India, with three points after two matches, including a dramatic tie against England, may be struggling to find the right bowling combination but O'Brien said the hosts had the resources to keep pressure on his team.

"A couple of bad matches won't make them a bad bowling attack. I've seen the likes of (paceman) Zaheer Khan and (spinner) Harbhajan Singh and they're very good bowlers," said O'Brien, who turned 27 on Friday.

"It's going to be a difficult game on Sunday. I'm looking forward to it as it's not every day that you play in front of 50,000 screaming fans. If I'm playing on a flat wicket, I'd try to hit the ball if it is there to hit."

The track has favored batsmen in the past two matches -- England v India and Ireland v England -- as each team topped 300 runs.

India need to back up their batting with tight bowling and fielding against Ireland, who showed the depth of their batting against England as lower-order batsmen Alex Cusack and Mooney made crucial contributions.

The hosts' batting looked formidable in their two matches so far, with Virender Sehwag and Virat Kohli cracking centuries against Bangladesh and Sachin Tendulkar scoring 120 against England.
But India's bowling has left a lot to be desired despite trying out different combinations as they conceded 283 runs against Bangladesh and could not defend 338 against England in the tied match.

Former India captain Sourav Ganguly said the hosts needed to be at their best against Ireland, who have "some outstanding players".

"India will have the chance to review their bowling attack as to whether they go with three fast bowlers or continue with two spinners and two seamers, which I don't think is the way forward," said Ganguly.

"India is the better side, but they must be ready and up for the challenge that Ireland will provide them with. India will have to be up and ready for it."

Comments
Topics mentioned in this article
Cricket Ireland Cricket Team John Mooney India Cricket Team World Cup 2011
Get the latest updates on ICC T20 Worldcup 2022 and CWG 2022 check out the Schedule, Live Score and Medals Tally. Like us on Facebook or follow us on Twitter for more sports updates. You can also download the NDTV Cricket app for Android or iOS.