Ireland's stunning performance against England and a formidable fight versus hosts India have helped the side climb to the 10th position in the Reliance ICC ODI Championship table. 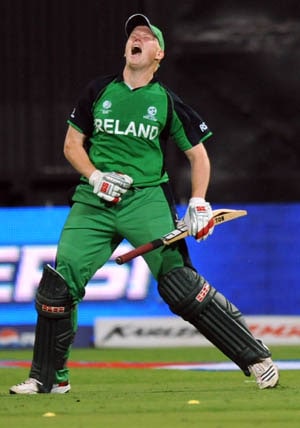 Ireland's stunning performance against England and a formidable fight versus hosts India have helped the side climb to the 10th position in the Reliance ICC ODI Championship table. They have surpassed Zimbabwe while Sri Lanka became the other top-gainer displacing South Africa at the third spot.

The Irish earned six clear points after beating their nemesis at Bangalore and have 49 points to their credit. The star-performer from the match, Kevin O'Brien has also catapulted himself to the 40th rank in the ratings for batsmen - a jump of 12.

His teammate, Trent Johnston has moved up to the 12th spot in the bowlers' ranking thanks to his 2 wickets apiece against England and India. His jump of eight places is followed by the likes of Graeme Swann of England (4th) and Nuwan Kulasekara (6th) who have moved up by three places each.

Amongst the batsmen, Jonathan Trott of England who is the fourth highest run-getter as of Monday, has jumped to share the 13th position in the batsmen ratings, along with Gautam Gambhir of India.

For India, the only minor change came in the form of Yuvraj Singh who moved up a place to the 22nd spot in a rating topped by the South African duo of Hashim Amla and AB de Villiers. Virat Kohli is at the third spot.

With the business end of the ICC's flagship event round the corner, more changes are expected even though the list of all-rounders has largely remained unchanged apart from Kiwi skipper Daniel Vettori claiming the fifth position.

Comments
Topics mentioned in this article
World Cup 2011 Hashim Amla Cricket Kevin O'Brien Ireland Cricket Team Yuvraj Singh Anil Kumble Gary Kirsten
Get the latest updates on ICC T20 Worldcup 2022 and CWG 2022 check out the Schedule, Live Score and Medals Tally. Like us on Facebook or follow us on Twitter for more sports updates. You can also download the NDTV Cricket app for Android or iOS.