Ireland batsman given out despite 2.5m rule

The much-debated UDRS System came into sharp focus for third time in the World Cup on Sunday as on-field umpire in the India-Ireland match gave an Irish batsman out LBW even though the point of impact of the ball on the pad was more than 2.5 metres from stumps. 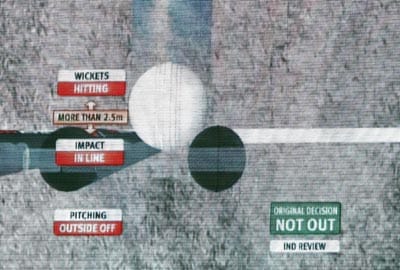 The much-debated UDRS System came into sharp focus for third time in the World Cup on Sunday as on-field umpire in the India-Ireland match here gave an Irish batsman out LBW even though the point of impact of the ball on the pad was more than 2.5 metres from stumps.

Australian umpire Rod Tucker initially ruled Ireland batsman Alex Cusack not out off Yuvraj Singh in the 44th over but after a review appeal by India, he reversed his decision and gave the batsman out though TV replays showed the point of impact at the pad would have been more than 2.5 meters from the stumps.

Cusack, the eighth Ireland batsman to be out and Yuvraj's fifth victim in the match, was well down the track, his backfoot nearly a foot outside the crease and his front foot also well down the track though HawkEye showed the ball would have hit off and middle at a comfortable height.

Ironically, during the tied India-England Group B match at the same venue on February 27, on-field umpire Billy Bowden stuck to his decision of ruling England's Ian Bell not out for a leg before appeal against him by the Indian team when he was rapped on the pad by Yuvraj.

India called for a review of the decision and technology showed that the ball would have gone on to hit the stumps but for the pad coming in the way. But the point of impact was more than 2.5m from the stumps and the batsman stayed on as Bowden stuck to his original call. 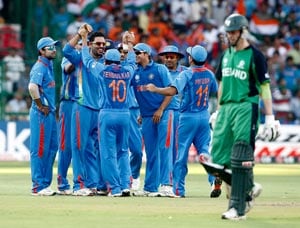 Even batsman Bell felt he was out and started walking back to the dressing room before he was asked to come back to the crease and continue his innings, and the incident created a major furore with India captain Mahendra Singh Dhoni going to the extent of criticising DRS and the International Cricket Council (ICC) for introducing it in the mega-event.

On March 4 also during the Zimbabwe-New Zealand Group A clash at the Motera stadium in Ahmedabad, the former team's captain Elton Chigumbara was given out leg before to his rival counterpart Daniel Vettori when he had stepped well out to the crease to play the Kiwi left-arm spinner.

Umpire Marias Erasmus declared the batsman out, a review of the decision was called for by Zimbabwe and it was found through TV replays that though the ball would have gone on to hit the leg stump, the point of impact was clearly beyond 2.5m. Yet umpire Erasmus stuck to his original decision and the batsman had to leave the field.

Comments
Topics mentioned in this article
World Cup 2011 India Cricket Team MS Dhoni Ireland Cricket Team Cricket
Get the latest updates on India vs South Africa and check out  Schedule, Results and Live Score. Like us on Facebook or follow us on Twitter for more sports updates. You can also download the NDTV Cricket app for Android or iOS.