England hope to recover from twin injury blows and virtually ensure their World Cup quarterfinal place with a victory over stuttering Bangladesh on Friday. 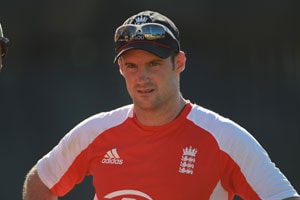 England hope to recover from twin injury blows and virtually ensure their World Cup quarterfinal place with a victory over stuttering Bangladesh on Friday.

England were floored by the departure of star batsman Kevin Pietersen and fast bowler Stuart Broad on successive days due to injuries as they prepared for the day-night game in Chittagong.

Pietersen flew home on Monday for hernia surgery, while Broad was ruled out for the rest of the tournament on Tuesday due to a side strain suffered during the six-run win over South Africa.

Fluent left-hander Eoin Morgan has arrived in the port city to replace Pietersen with coach Andy Flower expecting him to be match-ready by Friday.

Paceman Chris Tremlett, who is travelling with the squad as a bowling reserve, is likely to be named as Broad's replacement and should be available to play against Bangladesh.

England, with five points from four Group B matches, have two league matches to play - against Bangladesh and the West Indies - but a win on Friday should be enough to advance to the knock-out rounds.

The hosts, facing an early exit from the tournament after just one win in three games, will look to resurrect their campaign in front of a sell-out crowd of 18,000 at the Zahur Ahmed Chowdhury stadium.

Bangladesh must not only beat England, but also defeat the Netherlands and South Africa to cement a place in the quarter-finals.

Two more wins could also see them through, provided other results go in their favour.

Andrew Strauss' men will be buoyed by their impressive run against Bangladesh, having lost just one of their 14 one-day internationals so far.

Significantly, England have also won all their six contests on Bangladeshi soil, the last three in March, 2010.

England must find a new opening partner for Strauss in Pietersen's absence, with Ian Bell, Ravi Bopara and wicket-keeper Matt Prior the likely candidates.

The departing Broad welcomed Morgan back to the squad, saying he expected him to fire immediately.

"He's been our best one-day batsman for the past year," Broad said of the former Irish star. "It's a big boost to have him in the side.

"We know he can win games and plays spin particularly well."

Meanwhile, Bangladesh were determined to overcome the embarrassment of being shot out for their lowest one-day total of 58 in the previous match against the West Indies in Dhaka.

Bangladesh have been let down by their inconsistent batsmen, who began the tournament well by making 283-9 while chasing India's mammoth 370-4.

The Tigers were shot out for 205 by Ireland, fought back to restrict the non-Test nation for 178, before hitting a new low against the West Indies.

Opener Tamim Iqbal and skipper Shakib Al Hasan are the only batsmen to score half-centuries in the tournament, both against India. The next best is Raqibul Hasan's 38 against Ireland.

Spin spearhead Abdur Razzak has managed just one wicket in three games at a cost of 112 runs. Shakib has three wickets with his left-arm spin and off-break bowler Naeem Islam two.

Tamim, who hails from Chittagong, said the team had moved on from the West Indies game.

"The players are mentally fine now," the pugnacious left-hander said. "We are looking forward to doing something special in the coming games."

Comments
Topics mentioned in this article
Australia Cricket Team England Cricket Team West Indies Cricket Team Cricket Bangladesh Cricket Team Graeme Swann World Cup 2011
Get the latest updates on ICC T20 Worldcup 2022 and CWG 2022 check out the Schedule, Live Score and Medals Tally. Like us on Facebook or follow us on Twitter for more sports updates. You can also download the NDTV Cricket app for Android or iOS.