Both India and Sri Lanka have injury scares to their bowlers ahead of the World Cup summit clash on April 2. We take a look at the list: 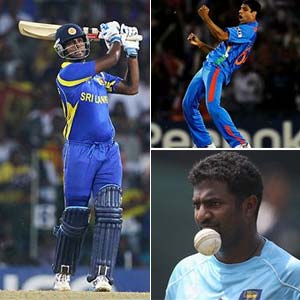 Both India and Sri Lanka have injury scares to their bowlers ahead of the World Cup summit clash on April 2. We take a look at the list: (Watch)

1. Ashish Nehra: The Indian pacer has been ruled out of World Cup final with an injury to his right hand middle finger which he sustained while fielding in the semi-final against Pakistan in Mohali.

2. Muttiah Muralitharan: The Lankan spinner, who turns 39 next month, skipped practice on Thursday at the Wankhede stadium and struggled with niggles through the course of the tournament, including a hamstring injury, a side strain, a troublesome knee and a groin issue. However, his coach Trevor Bayliss has said that Murali will play in the World Cup final, which will be last interanational match.

3. Angelo Mathews: Fitness of all-rounder Angelo Mathews is also a worry for Sri Lanka. During Lanka's semi-final match against New Zealand, Mathews had left the field with a minor injury to the thigh while fielding, and was visibly hampered for movement when he later came out to bat with a runner.

Comments
Topics mentioned in this article
World Cup 2011 Angelo Mathews Muttiah Muralidaran Ashish Nehra Cricket
Get the latest updates on ICC T20 Worldcup 2022 and CWG 2022 check out the Schedule, Live Score and Medals Tally. Like us on Facebook or follow us on Twitter for more sports updates. You can also download the NDTV Cricket app for Android or iOS.