Ireland were sweating over the fitness of in-form seamer Trent Johnston ahead of their crunch World Cup clash against the West Indies on Friday. 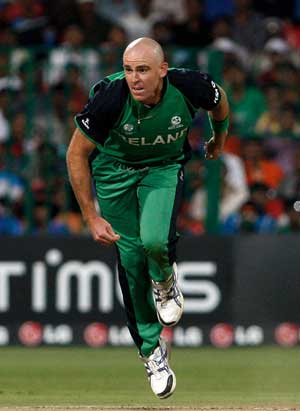 Ireland were sweating over the fitness of in-form seamer Trent Johnston ahead of their crunch World Cup clash against the West Indies on Friday.

Johnston, 36, took two early wickets during Sunday's five-wicket defeat to India in Bangalore before picking up a knee injury and taking no further part in the game.

The paceman also grabbed two wickets in each of Ireland's first two games of the tournament.

Irish skipper William Porterfield said the team will take a final decision on the veteran fast bowler only on the morning of the match.

"He bowled a couple of overs in the nets today. He ran in hard, he is keen to play the game," Porterfield said on Thursday.

"We will assess his fitness again and take a call on him on the morning of the match."

The Australian-born Johnston, one of the most experienced members of the Ireland squad, has taken 52 wickets from 50 ODIs.

If Johnston is ruled unfit, it will be a big blow for Ireland who must beat West Indies if they are to stay in contention for a place in the quarter-finals.

"We are treating it as a must-win game," said Porterfield. "We know we have to win at least two of our remaining three games.

"But we've played good cricket to this point and we've done our homework on the West Indies so we're looking good going into the game."

The West Indies, with two wins and a defeat under their belt, go in to the match on the back of a confidence-boosting nine-wicket victory over Bangladesh in Dhaka.

Ireland have two points and face fellow associates the Netherlands in their last group game.

But with South Africa also to come, a victory over the West Indies is a must for Ireland to stay on course.