Injured Broad out of World Cup

England fast bowler Stuart Broad has been ruled out of the rest of the World Cup due to a side strain, the England and Wales Cricket Board announced on Tuesday. 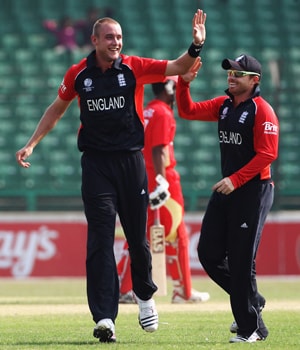 England fast bowler Stuart Broad has been ruled out of the rest of the World Cup due to a side strain, the England and Wales Cricket Board announced on Tuesday.

Broad, 24, will join teammate Kevin Pietersen on the sidelines after picking up the injury during his four-wicket haul in England's six-run win over South Africa in Chennai on Sunday.

Seamer Chris Tremlett is expected to replace Broad, but the ECB will need to apply to the World Cup technical committee first.

The ECB said Broad will leave Chittagong for home in the next 48 hours for further assessment that will "determine his recovery and rehabilitation timescale".

The ECB's chief medical officer Nick Peirce said the side strain was a new problem for Broad, who suffered an abdominal injury during the recent Ashes tour of Australia which caused him to miss the last three Tests.

"Stuart felt some discomfort following the South Africa match and our initial assessment indicated a strain to his left side," Peirce said in the ECB statement.

"Subsequent scans have confirmed a significant side strain injury - where the muscle attaches the rib - that will rule him out of the remainder of the World Cup.

"This is a new injury, separate from the abdominal tear suffered during the Ashes, that requires a period of recuperation and rehabilitation and the duration of this recovery period will be determined following further assessment in the UK."

It is the second injury blow for England inside 24 hours after star batsman Pietersen left for home to undergo a hernia operation.

Pietersen will be replaced by Eoin Morgan.

Comments
Topics mentioned in this article
England Cricket Team West Indies Cricket Team Australia Cricket Team World Cup 2011 Stuart Broad Cricket
Get the latest updates on ICC T20 Worldcup 2022 and CWG 2022 check out the Schedule, Live Score and Medals Tally. Like us on Facebook or follow us on Twitter for more sports updates. You can also download the NDTV Cricket app for Android or iOS.