Tens of thousands of Indians and a handful of Pakistanis packed the stadium for their cricket World Cup clash on Wednesday in a friendly atmosphere that belied diplomatic tensions between the countries. 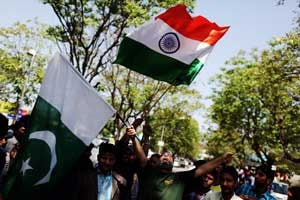 Tens of thousands of Indians and a handful of Pakistanis packed the stadium for their cricket World Cup clash on Wednesday in a friendly atmosphere that belied diplomatic tensions between the countries.

"We love the people of India as we share the same roots and the same passion for the game among other things," said elated Pakistani fan Ali Salman, who crossed into India via the only road link, the Wagah crossing.

"I managed to get a ticket through my friends in India. I can't thank them enough," the 32-year-old from Lahore told AFP as he made his way into the stadium through tight security.

"We arrived yesterday and the atmosphere at Wagah was electrifying. There were fans who were cheering for both India and Pakistan."

Barkha Sen, a 40-year-old Indian entrepreneur from nearby Chandigarh, said the match offered her a chance to extend a hand of friendship across the border.

"It is one of those rare opportunities that we must utilise to make friends. If I come across anyone from Pakistan, I am going to invite them home for a cup of tea," she said.

Both national anthems were respected by fans, though the overwhelmingly Indian crowd cheered every dropped catch by the Pakistanis who failed to take at least five chances during the Indian innings.

The loudest cheer was reserved for India's talismanic cricketer, record-setter Sachin Tendulkar, who hoped to score his 100th international hundred in the game but fell 15 short.

Cricket has frequently been the victim of poor relations between the neighbouring nations, with tours blocked for years because of bad-blood, but it has also been used to build trust and confidence.

In 2004, India toured Pakistan for a full Test series for the first time since 1989 as part of a diplomatic initiative called the "Friendship Series". Many Indian fans reported being welcomed like long-lost brothers.

On Wednesday, Indian Prime Minister Manmohan Singh and Pakistani counterpart Yousuf Raza Gilani watched the game together from the VIP enclosure and greeted the players in a high-profile exercise in regional bridge-building.

"To see the prime ministers of both countries shake hands with players will remain etched in my memory," said Shyam Shankar, an Indian software engineer who drove to Mohali for the match from New Delhi.

"Cricket can be a great healer and help mend relations with our neighbours. We should play each other more often."

Tickets to the game at the 30,000-capacity stadium were limited for the general public, partly due to the large reservations for VIPs, sparking a furious scramble for places.

Divya Pandove, a 24-year-old Indian studying software engineering, flashed her ticket to one of the VIP enclosures with glee as she made her way into the stadium.

"I think I have been very lucky. It had become a status symbol to be able to have a ticket for this match. I am going to tell all my friends by putting it on Facebook," she said.

A bevy of Bollywood stars added a dash of glamour to the occasion.

India's ruling political dynasty was also out in force, with the Italian-born head of the ruling Congress party Sonia Gandhi and her son Rahul both in attendance.

Only a few Pakistan fans could be seen in the public areas of the stadium, though family members of leading politicians such as former foreign minister Shah Mehmood Qureshi had VIP tickets.

Heavily-armed policemen were deployed at a series of checkpoints surrounding the stadium, meaning fans faced a long wait in heat and humidity to take their seats.

There were barricades at traffic intersections, manned by machine-gun wielding security forces, and policemen were confiscating all but essential items from fans.

Comments
Topics mentioned in this article
India Cricket Team New Zealand Cricket Team Pakistan Cricket Team Cricket World Cup 2011
Get the latest updates on India vs South Africa and check out  Schedule, Results and Live Score. Like us on Facebook or follow us on Twitter for more sports updates. You can also download the NDTV Cricket app for Android or iOS.