Sachin vs Murali, a farewell battle to cherish

Legends Sachin Tendulkar and Muttiah Muralitharan face-off in a mouth-watering duel for the last time when India and Sri Lanka clash in the World Cup final on Saturday. 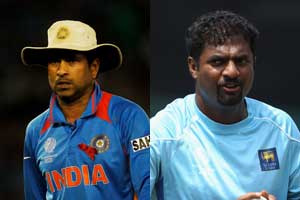 Legends Sachin Tendulkar and Muttiah Muralitharan face-off in a mouth-watering duel for the last time when India and Sri Lanka clash in the World Cup final on Saturday.

The contest between the world's leading batsman and highest wicket-taker in their final appearance in cricket's showpiece event will add spice to the big game at the Wankhede stadium.

Muralitharan, who turns 39 next month, will leave international cricket after the World Cup with more Test (800) and one-day (534 so far) wickets than any bowler in history.

Tendulkar's batting skills have not diminished even as he celebrates his 38th birthday next month, but he is unlikely to make a record seventh World Cup appearance in 2015.

A World Cup title has eluded the Indian star despite being the sport's most successful batsman with a record 32,785 runs and 99 centuries in Test and one-day cricket.

Muralitharan tasted World Cup glory in his maiden appearance in 1996 when Arjuna Ranatunga's men stunned Australia in the final in the Pakistani city of Lahore.

The ageing superstars have led from the front in this tournament to carry their teams into the final.

Tendulkar's 464 runs in eight matches are just three behind Sri Lankan Tillakaratne Dilshan's record tally of 467, while the wily Muralitharan has claimed 15 wickets despite battling injuries.

Muralitharan has soldiered on bravely over the past six weeks despite being afflicted by hamstring and groin injuries, a side strain and a troublesome knee.

"Murali is a legend to bowl virtually on one leg and still get wickets," the captain said.

"He is the icon of Sri Lanka, on and off the field, a fantastic human being and a great team man."

The off-spinner is the only player from either side to enjoy a World Cup triumph.

Tendulkar was 10 years old when India won the tournament under Kapil Dev in 1983, while five of his current team-mates -- Ravichandran Ashwin, Virat Kohli, Suresh Raina, Piyush Chawla and Munaf Patel -- were not even born.

India's South African coach Gary Kirsten, who played against Tendulkar in the 1990, regards the batting star as his hero and the "backbone" of the team.

"It has been an absolute honour and previlege to share the same dressing room as Sachin," said Kirsten, who will step down as coach after the final to spend more time with his family.

"There is nothing to teach Sachin. In fact, I have learnt a lot myself just watching him prepare for a game. He is my hero."

Win or lose, fans will relish the sight of the two old warriors battling under the hot sun. They do not make cricketers like them any more.

Comments
Topics mentioned in this article
Muttiah Muralidaran Sachin Ramesh Tendulkar World Cup 2011 India Cricket Team Sri Lanka Cricket Team Cricket
Get the latest updates on India vs South Africa and check out  Schedule, Results and Live Score. Like us on Facebook or follow us on Twitter for more sports updates. You can also download the NDTV Cricket app for Android or iOS.