A "war" seems to be brewing between Indo-pak couple of Sania Mirza and Shoaib Malik ahead of the high-voltage World Cup semifinal clash between India and arch-rivals Pakistan in Mohali next week. 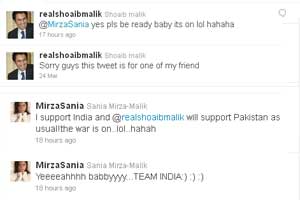 A "war" seems to be brewing between Indo-pak couple of Sania Mirza and Shoaib Malik ahead of the high-voltage World Cup semifinal clash between India and arch-rivals Pakistan in Mohali next week.

The much-awaited clash of the neighbours seems to have caught the couple in a battle of loyalty with the Indian tennis diva, Sania strongly coming out in support of her native nation, while hubby Shoaib cheering for Pakistan.

"I support India and shoaibmalik will support Pakistan as usual!the war is on," said Sania Mirza.

"Be ready baby its on lol hahaha," reacted Malik.

The mouth-watering encounter between the two neighbouring countries has set social networking site 'Twitter' abuzz with sportspersons and Bollywood personalities hailing Mahendra Singh Dhoni's men and wishing them luck for the important match.

"There we go:) enjoy it boys.. You're half way there... We are dancing in Miami," tweeted Indian tennis star, Mahesh Bhupathi.

Bollywood actress and co-owner of Rajasthan Royals, Shilpa Shetty, wrote on her Twitter page, "Yesssssssssssssssss We did it, good job team india...fabulous work Yuvi:)In the Semis...Bring it on, yipeeeeeeeeee!."

England's Kevin Pietersen, who was forced to cut-short his World Cup campaign following hernia, had his word of appreciation for the left-handed Yuvraj Singh.

India yesterday set up an exciting semi-final clash against Pakistan after the hosts ran home with a five-wicket win over Australia at Ahmedabad's Motera stadium.

Chasing a moderate total of 261, Dhoni's men held their nerves to overhaul the target with 14 balls to spare with Yuvraj Singh (57 not out), Sachin Tendulkar (53) and Gautam Gambhir (50) being the star batting performers.

Comments
Topics mentioned in this article
India Cricket Team Sania Mirza New Zealand Cricket Team World Cup 2011 Pakistan Cricket Team Shoaib Malik Cricket
Get the latest updates on India vs South Africa and check out  Schedule, Results and Live Score. Like us on Facebook or follow us on Twitter for more sports updates. You can also download the NDTV Cricket app for Android or iOS.