The much-anticipated World Cup semifinal clash between arch-rivals India and Pakistan on Wednesday is set to be played on a batting pitch which will also offer some purchase to the fast bowlers as "slight" grass will be left on it, according the groundsmen here. 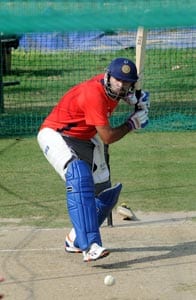 The much-anticipated World Cup semifinal clash between arch-rivals India and Pakistan on Wednesday is set to be played on a batting pitch which will also offer some purchase to the fast bowlers as "slight" grass will be left on it, according the groundsmen here.

The pitch at the PCA Stadium still sports some grass two days before the match and sources said that the groundsmen will have slight cutting at the most, fearing breaking up of the surface.

This means that the fast bowlers will have more purchase from the wicket than the spinners.

"It will be a good batting pitch. We are going not going to cut the grasses much as it may lead to breaking up of the surface. At the most, we may have slight cutting," sources in the Punjab Cricket Association said.

"The ball will seam a bit under the lights. It will be a typical Mohali wicket, with generally good pace and bounce, which is its basic nature," PCA curator Daljeet Singh said.

Another factor, which is expected to play a role in the outcome of the match, is dew. Over the last few days there has been heavy dew with the outfield being wet at night.

"We have been observing how much dew falls during these days," Daljit said.

Considering the dew factor and with the pitch likely to lose pace later, the team that wins the toss is expected to bat first. Bowlers will have tough time to grip the ball in the second innings.

History suggests that captains prefer to bat first after calling the coin right on this pitch.

Seven out of the nine matches played in the last five years have been won by the side batting first.

Out of those nine, seven were day-night matches with five won by the side batting first.

Also, out of the nine matches, the 300-run mark has been breached only twice. Incidentally, on the first occasion, Pakistan chased down India's 321 in a day-night game.

India may have been undefeated against Pakistan in World Cup history, but they have been beaten by the arch-rivals at this venue on two previous occasions.